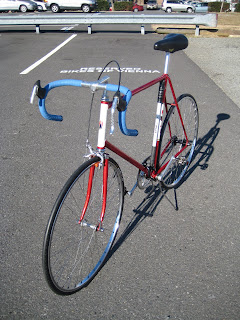 What can I say? It's an obsession... I love bicycles! And I find it really, really hard to pass up a cool, classic, old steel bike when it's my size! Like the Fuji you see there to the left, which is a 1981 Intermediate Track model. A strange name, to be sure... I guess it was intended to indicate that it was a mid-level quality bike, not a true "pro" bike, but an excellent bike for anyone else. That is, anyone else who wants to ride a track bike! 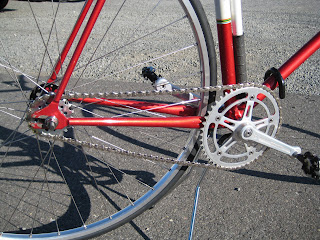 Now, the real bike geeks in the audience can skip this paragraph, but someone out there is probably thinking "What's he mean by a 'track bike' and how is that different from any other racing bike?" Well, as the name indicates, track bikes are designed to be ridden on a closed course, oval track, known as a velodrome. Among the things that set them apart from road racing bikes is the fact that they use a single gear, with a drive train known as a "fixed gear" ("fixed wheel" to the Brits out there). As shown here, a fixed gear has a single chain ring, a single sprocket, and no "freewheel" mechanism to allow you to coast. That's right, you can't coast on these bikes. If the rear wheel is going around, so are the pedals. Think back to your first tricycle as a little kid, and you sort of get the idea. Except in this case, you're going a lot faster, a lot higher off the ground. Oh, and a true track bike has no brakes.

That's right, no brakes. In track events, the riders control their speed solely through using their legs to resist the rotation of the pedals and thus the momentum of the wheel. It's a very different sensation from riding a conventional bike with a freewheel, and it takes some getting used to. For one thing, if you TRY to just stop pedaling, the bike won't let you... the pedals will keep going 'round, and you'll get the distinct sensation of the bike trying to lift you up and toss you forward. It's not quite as extreme or scary as it sounds, but it sure gets your attention. 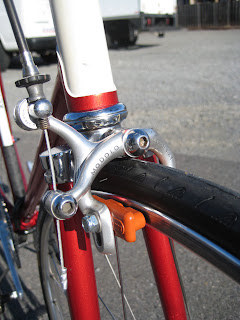 Now the observant among you are saying "Hey, wait, I see a brake on that bike!" Well, yeah. While some folks (who consider themselves purists, I suppose) ride true track bikes, sans brakes, on the road, I prefer to have a front brake there to help me out when I need it. For example, when I find myself on a steep downhill, and the pedals keep wanting to go faster and faster and faster, and my legs are having a hard time slowing them down or even keeping up. That's one of the interesting things about a fixed gear... when first they hear about it, most people immediately think "wow, that must make climbing hills tough!" In fact, the opposite is true... it's the downhills that are trickier, as your feet just keep going faster and faster and faster... a very odd sensation until you get used to it. And part of why I installed a brake on this bike. That and because you never know what might happen out there in traffic, and a brake can come in handy.

Now, friends of mine who know my tastes in bikes, will be surprised to see that front tire/brake setup. Why? Well, because that's a 23mm wide tire on there... a rather skinny one, and REALLY skinny compared to the 32-38mm wide tires most of my bikes have. But look closely and you can see there's no way I could put anything fatter under that brake or fork crown. You see, a track bike is designed to ride on the smooth (often wooden) surface of a velodrome, so there's no need for clearance for wider tires. We'll see how I like the ride like this... it's been a long time since I regularly rode such skinny tires, but back in my grad school days I went as narrow as 19mm, so who knows, I might like it a lot.

The true aficionados might actually be aghast to know that I drilled the fork crown out to accept that brake. It's true, and it might be considered blasphemy, but I really am a firm believer in having a brake for road use, and it's not like this is a truly high end, precious collectible. Sure, there aren't a lot of them left these days, but it was meant as more of an amateur's bike or training bike than a true, high end professional track bike. And aside from the frame, only the headset and crank/bottom bracket were original when I got the bike. Oh, and I have the original saddle, but haven't put it on, because it didn't work with the cheap seatpost I had handy. Maybe it will go back on when I get a nicer post. Anyway, I hope I haven't offended anyone too badly by drilling the fork... I have access to a really good drill press, with a very accurate and stable vise clamping assembly, so I knew I could do it safely and accurately. And wow, is that Fuji crown a big hunk of solid metal! No worries about structural integrity at all.

So far I've only tootled around the parking lot on it a little... it's been pretty chilly here lately. Soon though I hope to take her out on a good long shakedown ride, and get a feel for how she rides. I expect I am going to like it a lot. It's the fourth fixed gear bike I've owned, but the first one that came from the factory designed for the track. My earlier "fixies" (I'm not sure if I like that term or hate it... consider me torn) were standard road frames, converted to fixed gear drivetrains. This should be a rather different experience, I suspect.

For more information on this bike as it originally came from the factory, as well as other old Fuji info, see:

For more photos of this bike, as well as some of my other bikes, see:

I've already had two friends tell me it would look better with a dark, forest green bar tape. Duly noted, and that's probably in the future. I had this tape hanging around for too many years. It was given to me by my pal Shawn, and I've been waiting for the right project to try it on. This seemed a good choice, and it's pretty nice for now. Thanks Shawn!

Coincidentally, the rear hub came from another friend, named Sean (they can argue over which is the "right" spelling), who happened to call shortly after I got the frame, and when I mentioned I needed a hub, said he had one he wasn't using. Good timing, huh?

Very sweet bike. And don't worry about the tyre width. If anything, the past 40 years have taught me that 32-38mm tyres are way overrated. Give me the skinny ones, give me the speed.

Eighteen and a half bikes.
One butt.
Something to ponder there, I'm sure.

I'm curious as to whether or not you get a chance to ride all 18.5 of them thar bikes? Got a favorite?

Well, let me address all three of these at once...

Funny how different we all our... I've spent the last 30 years discovering how much I love 32-38mm tires! And I don't feel like they really slow me down, at least not enough to worry about, if at all.

And while it's true I have only "one butt" (it'd be kind of freaky if I had more, wouldn't it????), that doesn't mean I can't move said butt from one bike to another. And yes, of the bikes that are all up and running right now (roughly all but 3, I think), I do get a chance to ride them all.

The "favorite" question is both simple and tricky... yes, if I had to pick ONE favorite bike, it's my Trek 414, which I bought new in 1980, and have owned and ridden the logest of any bike. However, each of the other bikes has things in particular I really appreciate about it, and if it weren't for the sentimental factor on the Trek, I'm not sure I could pick a favorite. This might be the topic of a future post though, thanks!