Stablemate for my orange Centurion Professional

By now if you've poked around this blog at all, you'll have seen a few posts about my shiny orange Centurion Professional and how I came to have it.  Over the years since I got that bike, I've learned a lot about the brand, and I've seen quite a few other models, but never another Professional in person, and very few even online.
I did however see a fair number of the next model down, the Semi Professional (called the Semi Pro in some years), both in person and online and in various internet groups to which I belong.  I even had a 79-82 Semi Pro frame that I built up and rode as a fixed gear for a few years before selling it (which I regret).  On the IBOB (Internet Bridgestone Owners Bunch) and Classic Rendezvous mailing lists, some of us even jokingly referred to ourselves as a sort of informal Centurion Professional/Semi Pro club.
You can probably see where this is headed... years of looking at and reading about others' Semi Pros got me to thinking I'd really like one as a stablemate to my lovely orange Professional.  In particular, I really liked the pale blue ones, which looked really classy and made a nice complement to the orange.  Now and then I'd look for one online, but never really found one I liked in my size (24.5" to 25.5" or so).  And in the mailing lists, I'd now and then comment on how much I wanted one.
One day I spied a particularly sharp looking blue 1977 Semi Professional posted by the fellow who had recently bought it.  I commented on what a nice bike it was, and we exchanged some messages and I shared some info I had on Centurions.  I of course told him if he ever wanted to part with it, I wanted to be the first to know.  Then some time later, I casually asked what size his bike was, and he responded that it was a 25.5"... and went on to say he'd just been thinking of me, as he was considering parting with the bike.  Well, one thing lead to another, and before long, the bike was at my shop.
It took me longer than I'd planned to get it put back together and ready to ride.  I ended up re-lacing the wheels with new spokes, and put new cables and brake hoods, and a few other small things, but overall I kept the bike as it came to me, and it looks really great and rides great.  Compared to the Professional it's a bit more laid back and stretched out, as it's more of a classic "sport tourer" of its era, where the Professional was meant to be a true racing bike.  The finish is very much like the Professional, with a pearlescent blue paint over a chrome plated base, with some of the chrome showing through at fork ends, dropouts, some of the lugs, etc. 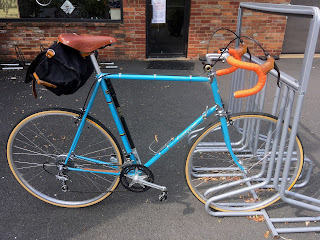 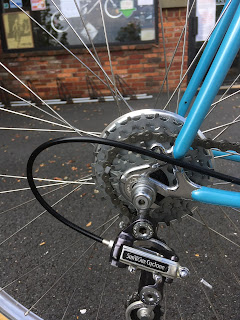 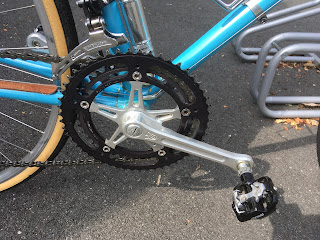 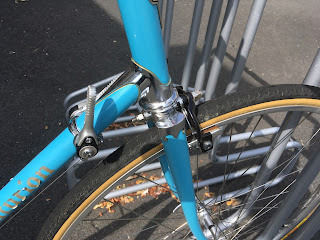 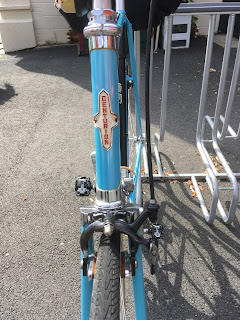 The components on the bike are very good, nearly as good as the Professional.  Front and rear derailleurs are SunTour Cyclones on both bikes, which at the time were the top of the SunTour line (bumped down a notch a year or two later when Superbe was introduced), while the shifters are the PDM Power Ratchet shifters on the Semi Pro vs. the Cyclones on the Professional.  The brakes are Dia Compe Gran Compe, the first generation of that model as near as I can tell.  The crankset on the Semi Professional is a Sugino Mighty Compe, a step down from the Mighty Custom on the Pro.  Hubs on both bikes are Sansin Pro Am, but the rims on the Semi Pro are 27" single wall rims about 22mm wide.  The Pro originally would have had "sewup" racing tires and rims, but mine now has narrow 20mm clincher rims.  The most obvious difference at first glance of course, is that many of the components on the Semi Professional have black elements while the Professional has all silver components.  Both look really great, though truth be told, I'm a traditionalist and like my parts silver.
I set the bike up with orange bar tape, and plan to change out the bar tape on my Professional to pale blue, so the two bikes will sort of mirror each other.  Stay tuned for a "family photo shoot" when I have the time.
Photos of the Semi Professional are here:  1977 Centurion Semi Professional
Catalog Scan of the 1977-78 Centurion Catalog: Centurion Catalog
Photos of the Professional are here:  1978 Centurion Professional
Posted by Tim at 10:33 PM No comments: