It's been far too long since I've written here.  It's not that nothing noteworthy happens in my life... it's simply finding the time to sit and write.

But tonight I break the dry spell because something really odd just happened... something I've never seen before.  I was working in the shop after closing, with the lights on, including lights right near the front window.  Suddenly I heard a soft "thump", followed by a fluttering sound... then another thump, some more fluttering, then silence.  I looked over just as the fluttering was dying down, just in time to realize a bird had just flown into the glass window, and now lay pressed against the glass, wings spread, face pressed right to the glass. 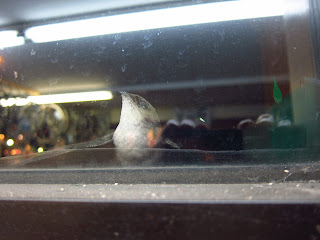 Apparently it was drawn by the light. I looked closely at it, and it was clear it was a chimney swift. A pretty common bird here in the evening, but I've never seen one do what this one was doing. Concerned, and seeing that it didn't seem to be at all inclined to extricate itself, I turned off the lights, then went outside to see if there was anything I could do. I was afraid the little guy had been injured, but a few seconds after I stepped outside, with a great flurry of wings, he took off, a bit unsteady at first, and flew across our lot and vanished.

Curious, I poked around online a bit and found advice for how to get a swift out of your living room if it comes down your chimney... and sure enough, one of the first steps is to turn off the lights, so it is drawn back up the chimney by the light outside.  Who knew?
Posted by Tim at 9:18 PM 1 comment: