Anyone who knows me or has read this blog much knows that I have a love of the C&O Canal, which runs 184.5 miles from Cumberland, MD to Georgetown in Washington, DC. Built in the 1800s, and obsolete almost as soon as it was operational, the canal ceased operating in 1924. After long neglect and debate about its future, in 1971 the canal was made a National Historic Park, creating and preserving what I think is one of the finest recreational and historical resources in the greater DC area. 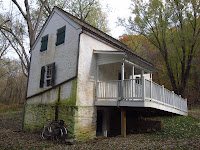 One of the features of the canal I've long been fascinated with has been the various lock houses along the towpath. Built to house the folks who tended and operated the many locks on the canal, they were mostly modest, simple homes of brick and stone construction. Some are long gone without a trace, others are merely foundations... but many still stand as relics of a past way of life. And in the last few years, the C &O Canal Trust has restored a half dozen of them and opened them up for overnight use by guests, to give folks a chance to sample what it might have been like to live on the canal in its heyday.

So on November 11th, to celebrate her birthday, my sweetie and I packed up our bikes and set forth for Lock House 28, at mile post 49. Starting just outside the Capital Beltway, at an area known as Carderock, we rode for about 40 miles to get there, and it was a wonderful ride. The towpath is virtually flat the whole way, making for a pretty easy ride. The surface can be a bit rough in spots, but with the right bike, the right tires and some care, it's just fine.

One of my favorite sights on the towpath is the Monocacy Aqueduct. There were a number of stone aqueducts along the canal in the years it was operational, built to carry the water of the canal across rivers or streams that crossed paths with it as they flowed to the Potomac River. After the canal ceased operations, the aqueducts fell into disrepair, and some collapsed completely. Ultimately, the Monocacy received a major renovation, and stands as a wonderful reminder of what once was.

Of course, the real highlight of the trip was the lock house itself. We arrived there at dark, basically, and let ourselves in using the passkey, which is kept in a coded lockbox by the front door. The first thing that struck us was how chilly it felt inside. The day itself had been pretty warm for November, but the stout brick construction, coupled with the fact that the windows were all closed up and shuttered, meant that the cold night air really stays in these buildings a long time. We were very glad we'd brought good sleeping bags with us. 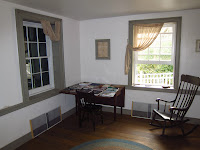 Once we had let ourselves in, we did a little exploring. The house has two floors, with two bedrooms on the second floor and a sort of living room and dining room below. There's also a basement, but that wasn't accessible to us. This particular lock house was set up to resemble what it might have looked like during the 19th century period of canal operations, with simple but charming wooden furniture and bedding. The walls were decorated with photos from various periods of the canal's history, and there was even a cabinet full of some lovely dish ware in a period style. 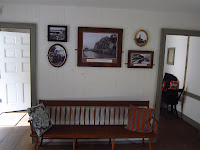 After getting unpacked and settled in, it was time for dinner. It was a beautiful night, so we decided to try lighting a fire and eating out under the stars. My girlfriend did a great job of building and lighting the fire... I was suitably impressed. A nice, simple dinner of hot soup, and we were ready to settle in and read a while. It was really quite fun to climb the narrow wooden steps by the light of a headlamp, then climb into a simple wooden bed with thin mattress (in a down sleeping bag too), and just relax and enjoy a good book. 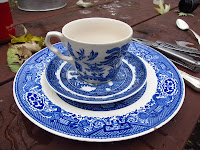 Even better was waking up in the morning and figuring out how to open all the windows and shutters! The simple charm and coziness of the lock house became so much more evident with sunlight pouring in. After breakfast we just took some time sit and relax and enjoy some rest before setting out for the return ride. A hot cup of coffee or two, from one of the china cups (shown here beside some of our camp cooking gear), and a leisurely packing up, and we were ready to head back home. While the day started out cloudy as predicted, a few hours down the trail found us basking in sunlight by the river. And even though we had covered the same ground the day before, it somehow always feels different along the canal... the light is never quite the same, and riding in each direction gives you a different perspective on all you see.

We got off the trail right at dark again, and packed our stuff in the truck and headed home, refreshed and relaxed from a wonderful little adventure. All in, a delightful weekend.