You learn something new...

... okay, maybe not every day, but often enough that the expression carries weight. 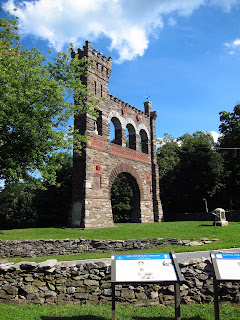 Yesterday, my girlfriend and I went to Gathland State Park, near Burkittsville, Maryland. It's on South Mountain, the site of a Civil War battle that was a precursor to Antietam.. and the site of the finding of the famous "lost orders" of Robert E. Lee.  I knew all of that part of the history... but I had no idea it was also once the home of George Alfred Townsend, or that he was a renowned war correspondent during the Civil War.  He built a rather amazing estate there, as well as a giant arch as a memorial to his fellow war correspondents. Quite a remarkable man and a great story.  If you get a chance, visit the park, or at least look him up in Wikipedia - George Alfred Townsend.

Funny thing is, I'd been to this park before... back in college. But that was at the end of a 42 mile hike along the entire Maryland stretch of the Appalachian Trail. It was about 11:00pm and we were bleary eyed with exhaustion, so I can't really feel badly about not noticing all the structures in the park.

... like this blog, which again has sat idle for too long.

And this old bike, which I've just started to bring back from it's state of neglect.

You might recognize it... it's the 1977 Fuji I wrote about previously here.  To recap, I bought this bike new in 1977, from the long-gone Alpha Bicycle Shop in Rockville, MD.  I had just turned 16 at the time, and had saved up my money from the kite making business my then-brother-in-law and I started a couple of years earlier.  The first bike I bought with my own money, it was the end result of lots of reading and research. Back then, Fuji was "the" Japanese bike to own, as they'd made the biggest impact on the US market up to that point, and they were good, solid bikes. Some favorable reviews, including in the classic Richard's Bicycle Book lead to me to seek out this particular model, as it seemed to give great value for the price.  How much was it? Between $225 and $250 at the time... definitely a step up from the "entry level" Raleigh Record I had before, but not "high end" by any means.

I owned and rode the bike only three years, but learned a lot about riding and fixing bikes from it. By the time I sold it to my good friend Phil, I had spent many happy hours tooling around my home town, and on longer rides to other towns, such as Annapolis or Glenn Dale. Working from Richard's Bicycle Book and Tom Cuthbertson's Anybody's Bike Book, I taught myself much of what I know today about fixing bikes. I even spent some time customizing it... changing the gearing a few times to find a setup that worked for me... trying several water bottle mounts... different tires... etc, etc.

The time came though, that I wanted something a bit better, and sold the Fuji to help finance a shiny new Trek. Many years passed, Phil and I fell out of touch, and I always wondered what became of the bike. After moving all over the country for years, I returned to the DC area in 2002, and began reconnecting with old friends. Eventually, Phil and I got in touch, and I learned he still had the bike, bur hadn't really ridden it in a long time. Ultimately, one day in winter of 2011, Phil pulled up in front of bikes@vienna with the Fuji on his car, asking if I'd like to have it back.  Would I? Of course!

So now I'm finally beginning the work of cleaning her up and getting her in shape to ride. First is total disassembly and cleaning... under a lot of dust and dirt, the paint and chrome are actually looking pretty good. Some of the parts are pretty crusty, and I'm not sure which I will keep and use, and which I will give up on, but I'll probably try to use as much as I can.  At the moment, I'm leaning toward building it up as more of a "city bike" than a road bike, so the drop bars will probably be replaced by something more upright, and some other things will be swapped out as well.

The first night of pulling her apart and cleaning her up brought back so many memories...  I could almost smell the Varsol and WD-40 I used to use to clean and lube my bikes back then.  And putting tools to the old familiar parts took me back to the days of my teenage years.

It may take a few weeks to get it all done, but I'll be updating the blog here as I make progress. Follow along if you'd like!