Really Nice Gesture by a Customer

There are times in the retail bike shop world when one gets really frustrated and tired with a customer. It's true. None of us, employees or customers, are perfect. We get on each other's nerves, irritate one another. It happens, and it's usually totally unintentional, so you learn to take a deep breath and move on.
Then there are interactions like we had the other day. A long time customer of ours thought he'd detected a strange new vibration in his bike, and asked if I'd look at the bearings in his front wheel. We gave him a "loaner" wheel for a day or two, so he could keep riding while I looked into the problem, and also so he could see if the phenomenon was present with the other wheel or not.
Long story short, it turns out there really wasn't anything "new" happening, but other factors had conspired to make an existing vibration more pronounced. We talked about it, and agreed it wasn't worth worrying about and the wheel bearings were fine. When he asked what he owed, I told him it was covered under our "continuing care" policy... when you buy a bike from us, any labor under $20 is free... and swapping the wheel and tire fell comfortably into that. But the customer wouldn't take no for an answer and said he was going to get his wallet.
I didn't talk to him again, but a few minutes later, John, my boss, told me what had transpired... the guy had left John $50! So when lunch time arrived, one of our staff was sent out, and returned with a pile of burritos for us all, as well as a carton of ice cream and a big bottle of root beer. Burritos and root beer floats for everyone... it definitely made a hot summer day feel a lot cooler and more fun!
It's days and customers like that one that make the few tough times a lot more bearable. And makes you really appreciate being appreciated.
Posted by Tim at 2:34 PM 2 comments:

Well, I've been having a tough time squeezing in bike rides so far this summer, but this evening I had a lovely one, even if it was short. I left work about 7:30 and rode out our local rail trail, the W&OD. It was a gorgeous evening, bright blue skies and warm but not hot, and for a change, not humid either! 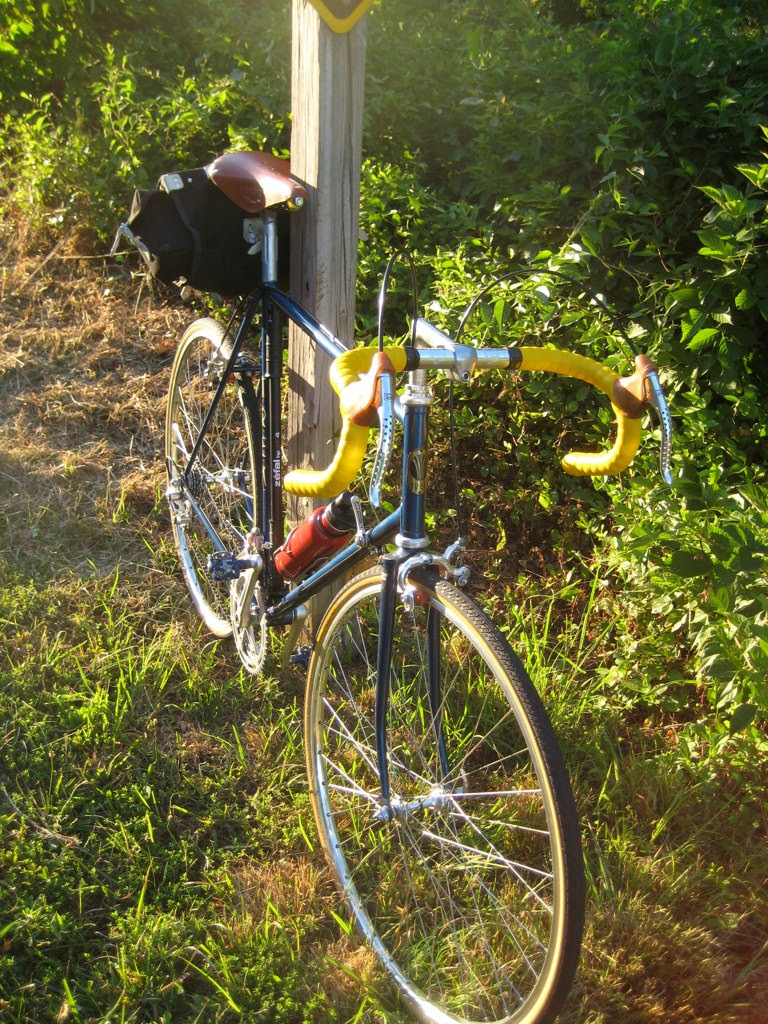 I decided to ride another relatively recent addition to my "stable" of bikes... my 1978 Trek 530 road bike. Those of you paying close attention to my bike collection might notice that I seem to have a disproportionate number of bikes built in 1978... at least 4 at last count! I have no idea why this is... it's certainly not been intentional. But while 1978 has no particular magic for me, that general era of late 70s to early 80s does have a special appeal, as that was the period in which I first got into cycling.

Folks who know me also know of my fondness for road bikes from that era built by Trek. Back when I bought my first Trek, in 1980, they were still a fairly obscure company, not the dominant force in the industry they are today. It was kind of "you mean someone is building high quality bikes in Wisconsin????" at the time. And back then, they were largely handbuilt, using what at the time were pretty standard construction methods, but which today are considered "classic" (or antiquated, depending on your point of view!). I've been fortunate enough to own a total of five of their bikes from this period, and the 530 is one of the three I currently own. It's one of their more "racing oriented" models, so it feels a bit more nimble and agile than my other two, which were "sport touring" bikes. 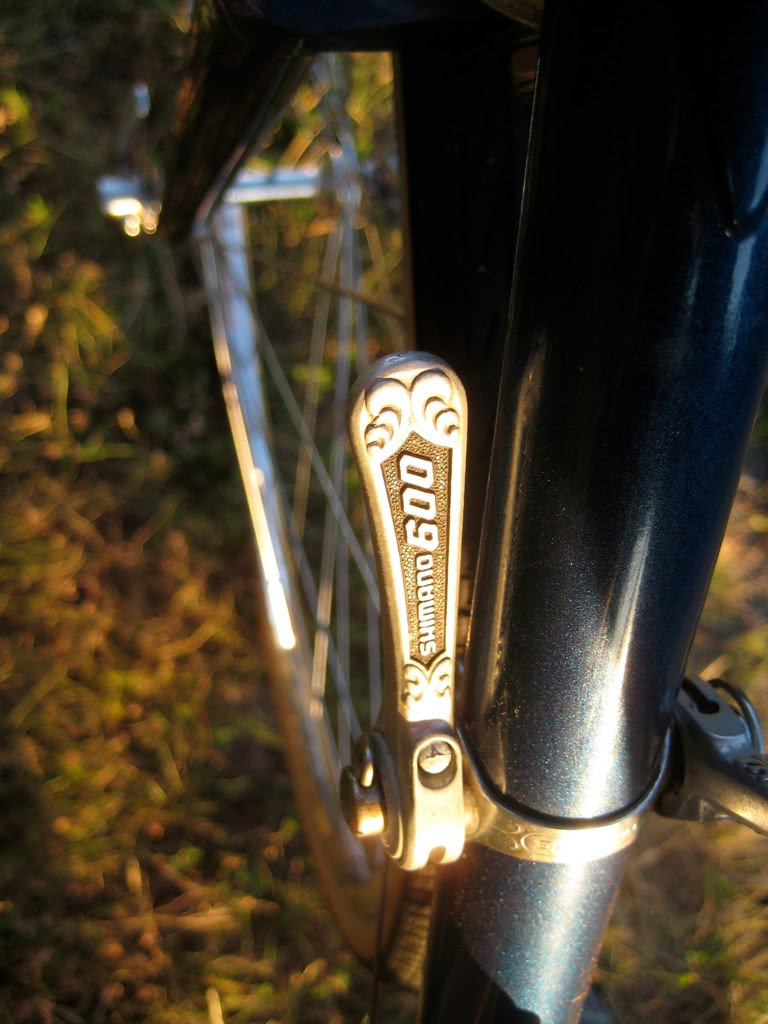 Another feature of this bike is that it has most of its original components, unlike my 1980 Trek 414, which has been modified time and again over the years, and now sports a semi-modern set of components. The 530, on the other hand, has vintage 1978 Shimano 600 parts mostly, from what's commonly known as the "Arabesque" era of that parts group. You can see the fancy curlicues that give the group it's nickname in this photo of the left shift lever. Cranks, brakes, brake levers, shifters and derailleurs are all the original Shimano 600 parts, while the hubs are period correct Sunshine Professionals, a high quality Japanese hub of the era. The rims are curent model Sun M13IIs, which look about as "period" as any modern rim does. Bars and stem and seat post are all from Sakae Ringyo (SR), which was typical of Treks back in the day. Of course, those of you who know me or follow this blog are not surprised to see the Brooks saddle or Carradice saddlebag... personal favorites of mine.
Aside from having a good time riding this particular bike, it was just a gorgeous evening all around. A fair amount of folks were out enjoying the trail, and I also saw several deer and rabbits, as well as one rather blasé groundhog who was unimpressed by my passing. Since it was getting on toward sunset, the light was cutting across the landscape at a very shallow angle, which I always find dramatic and beautiful. It made for sketchy visibility on the ride out, but sunglasses help with that. All in all a wonderful ride. 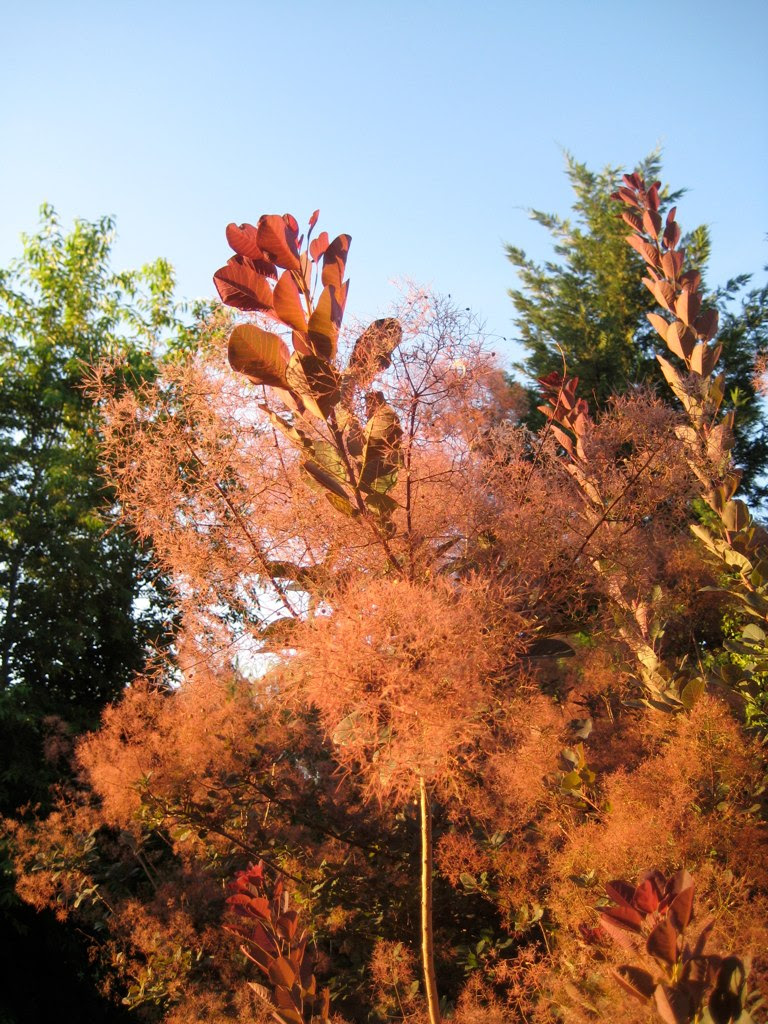