One bike leaves the herd... 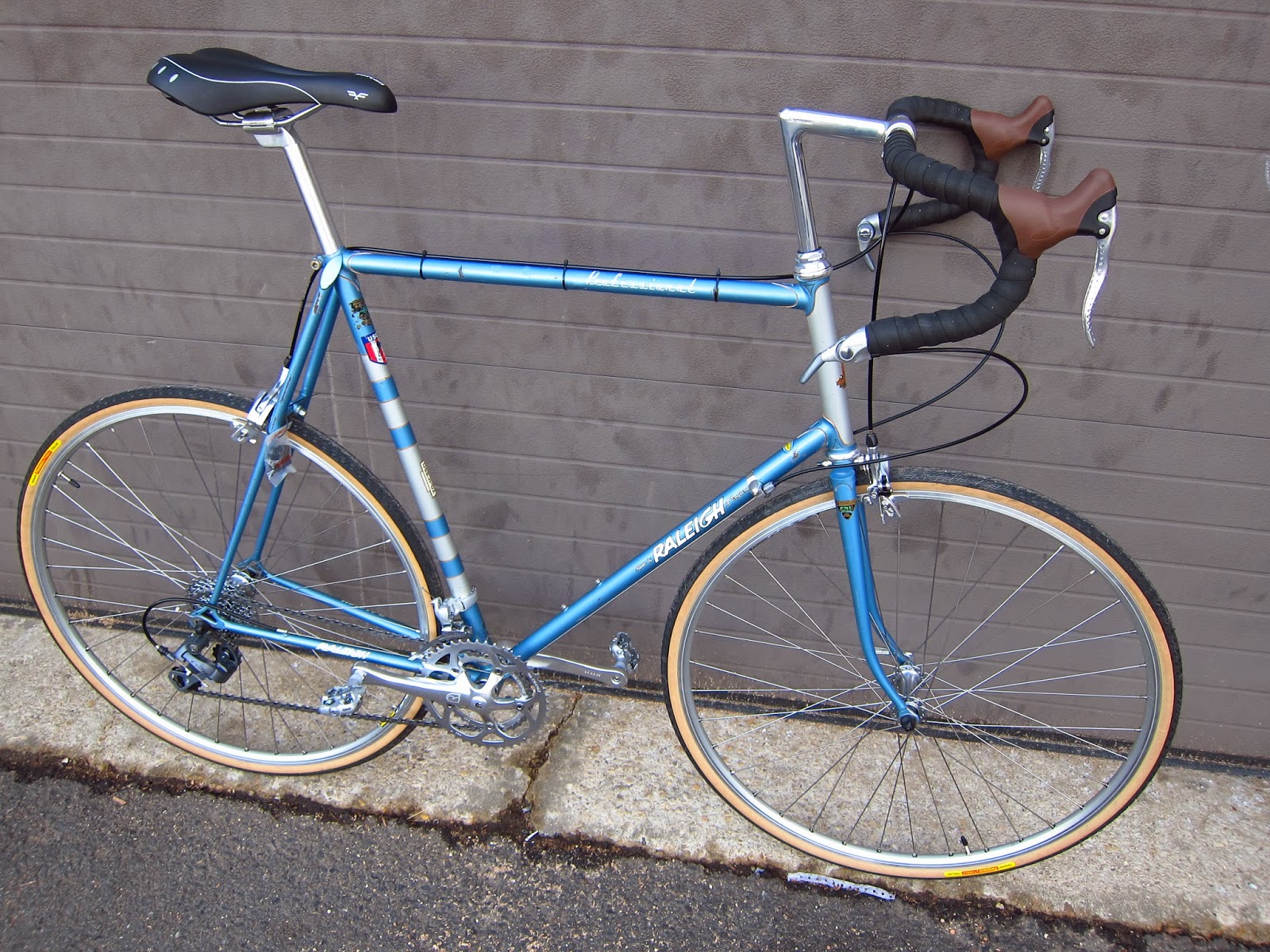 Yes, I've actually decided to part with one of my bikes.  Readers of this blog might think "wait, I don't think he's ever written anything about this bike before"... and you're right... aside from a passing mention or two, I haven't really said much about it. Which goes a long way to explain why I'm passing it on to my best friend (who also has the Fuji Allegro that used to be mine).  I've had the bike for a number of years, but honestly wasn't riding it all that much, so when my best friend said he was looking for a lighter, faster bike than the ones he has, I suggested he give some thought to this one.

The bike is a 1978 Raleigh Professional, a bike that I had eyed a lot when I was a teenager in the late 70s.  I never had that kind of money back then though, so it wasn't until a few years ago I finally got my hands on one.  It's a handsome bike, and a very nice riding one, but over the years I found I was riding it less and less.  Part of the reason was the "sewup" tires which are trickier to mount and repair than conventional tires, but I also found the "race" orientation of the bike just made it one that I rode less often than my more "general purpose" bikes. 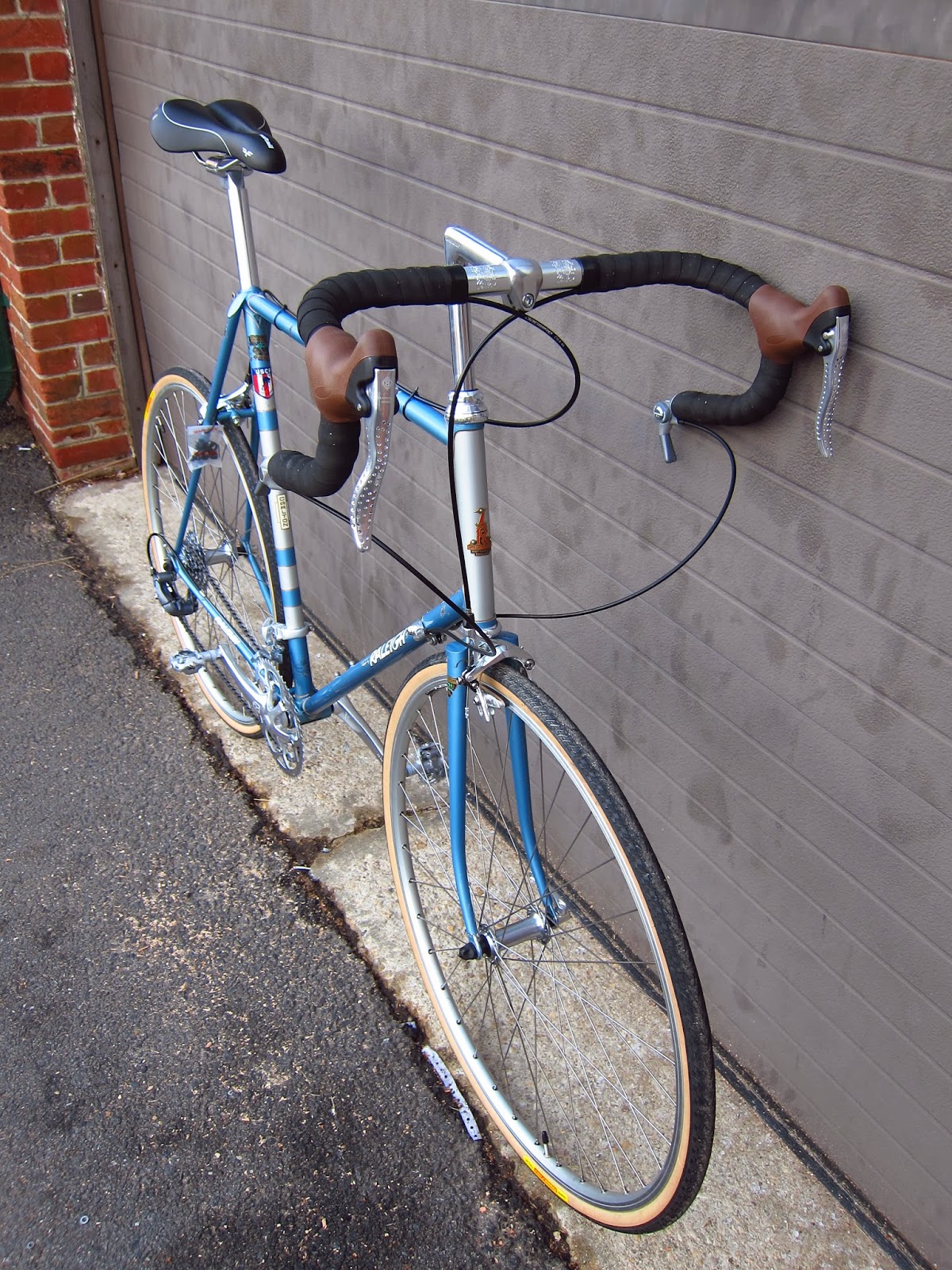 Like most better racing bikes of its era, the Pro was equipped with Campagnolo components, the Nuovo Record group to be exact. Very nice stuff, just about top of the line back then... the only thing "better" was Super Record, with some titanium bits in the mix.  Solid, reliable, and beautiful, these old Campy parts were beyond my reach in '78, but I've since owned several bikes set up with them, and I have to say, while folks used to modern indexed shifting systems and integrated shift/brake levers might not appreciate them, they work great and hold up for years. 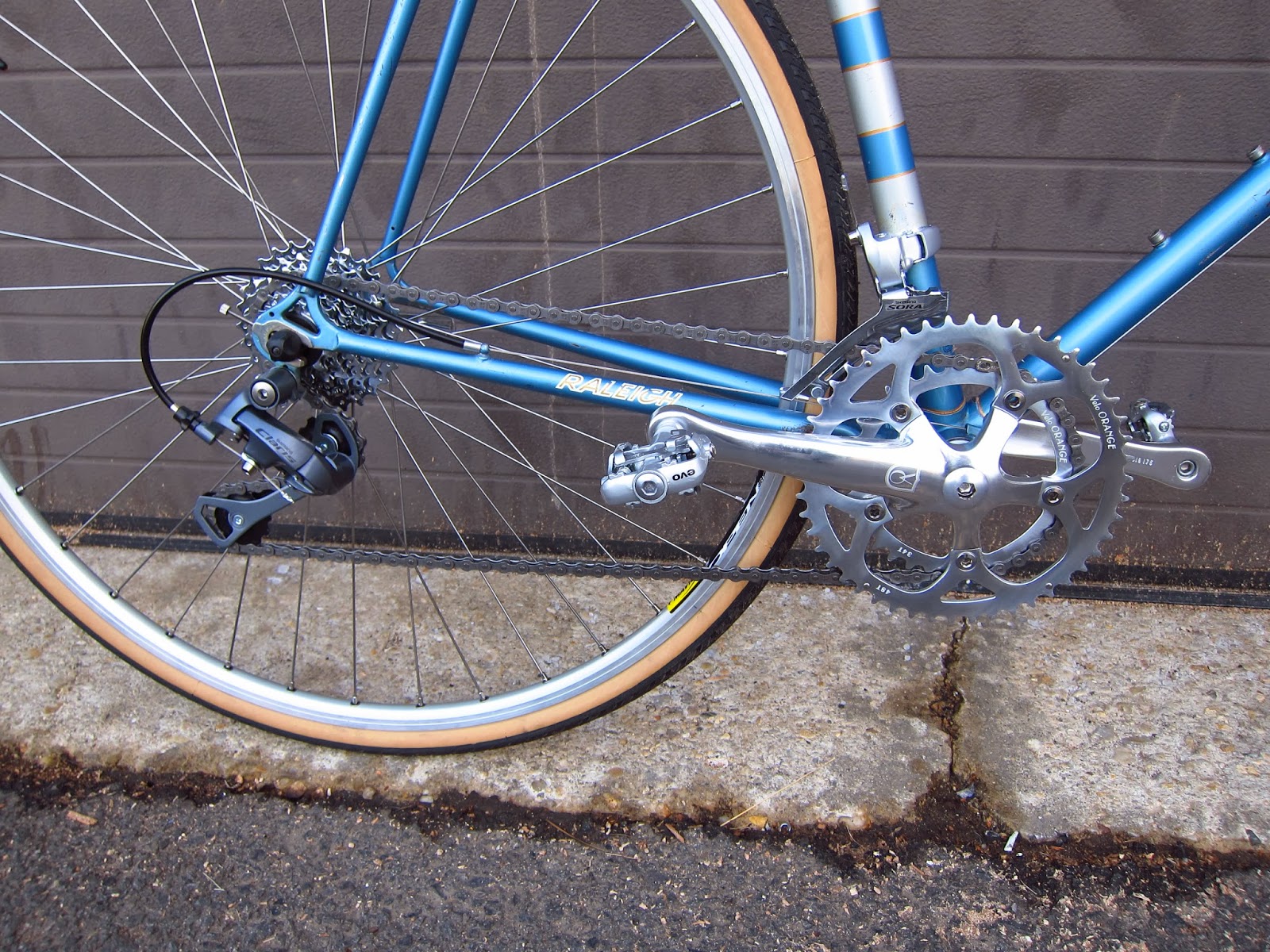 That being said, my buddy had said he was looking for something a bit more modern, so after some thought and consultation, I put together a more modern mix of components to suit his needs.  First, we decided on indexed bar end shifters, as he was accustomed to that shifter position from his other bikes. Shimano derailleurs and an eight speed cassette sprocket cluster on the rear coupled with a Velo Orange "compact double" crankset on the front gives a nice, practical range of gears and smooth, easy shifting. 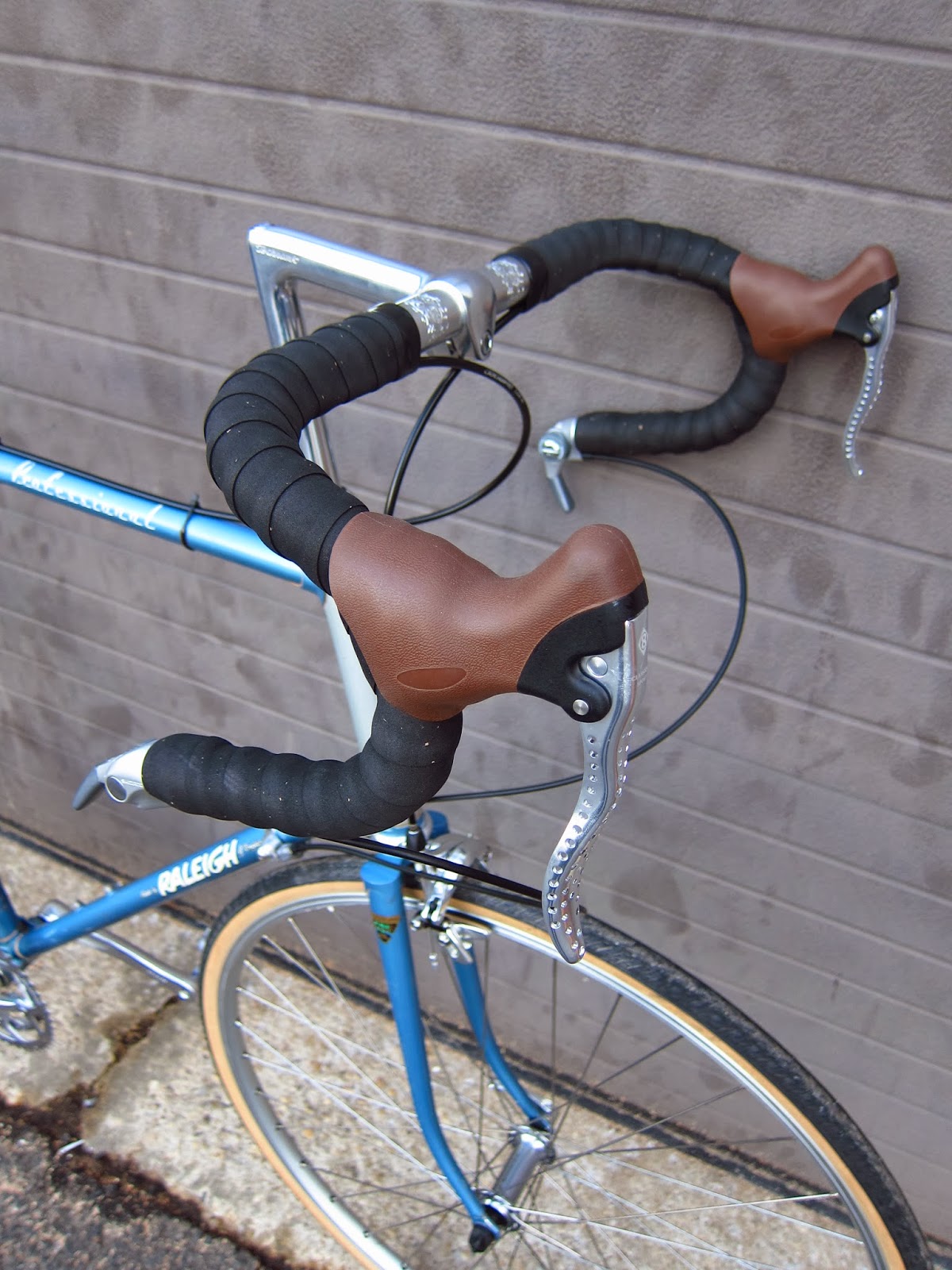 Brakes are a nice set of Tektro dual pivot sidepulls... much more powerful than the original Campy Record brakes.  Finally, the wheels were built up on Shimano Tiagra hubs, using double butted stainless steel spokes and Mavic Open Sport rims, for solid but light wheels.  Last but not least, we mounted Panaracer Pasela tires, a favorite of mine, in 28mm width, for a nice balance of speed and comfort.

My friend has only had a chance to take a short ride on it so far... we got a major snow storm a few days after he picked it up... but based on his first impressions, he's going to like this bike a lot.  Light and nimble, classically styled but with modern updates, I think it's a winner.  I'll let you know how it works out in the long run as he gets more opportunities to ride the bike this spring. 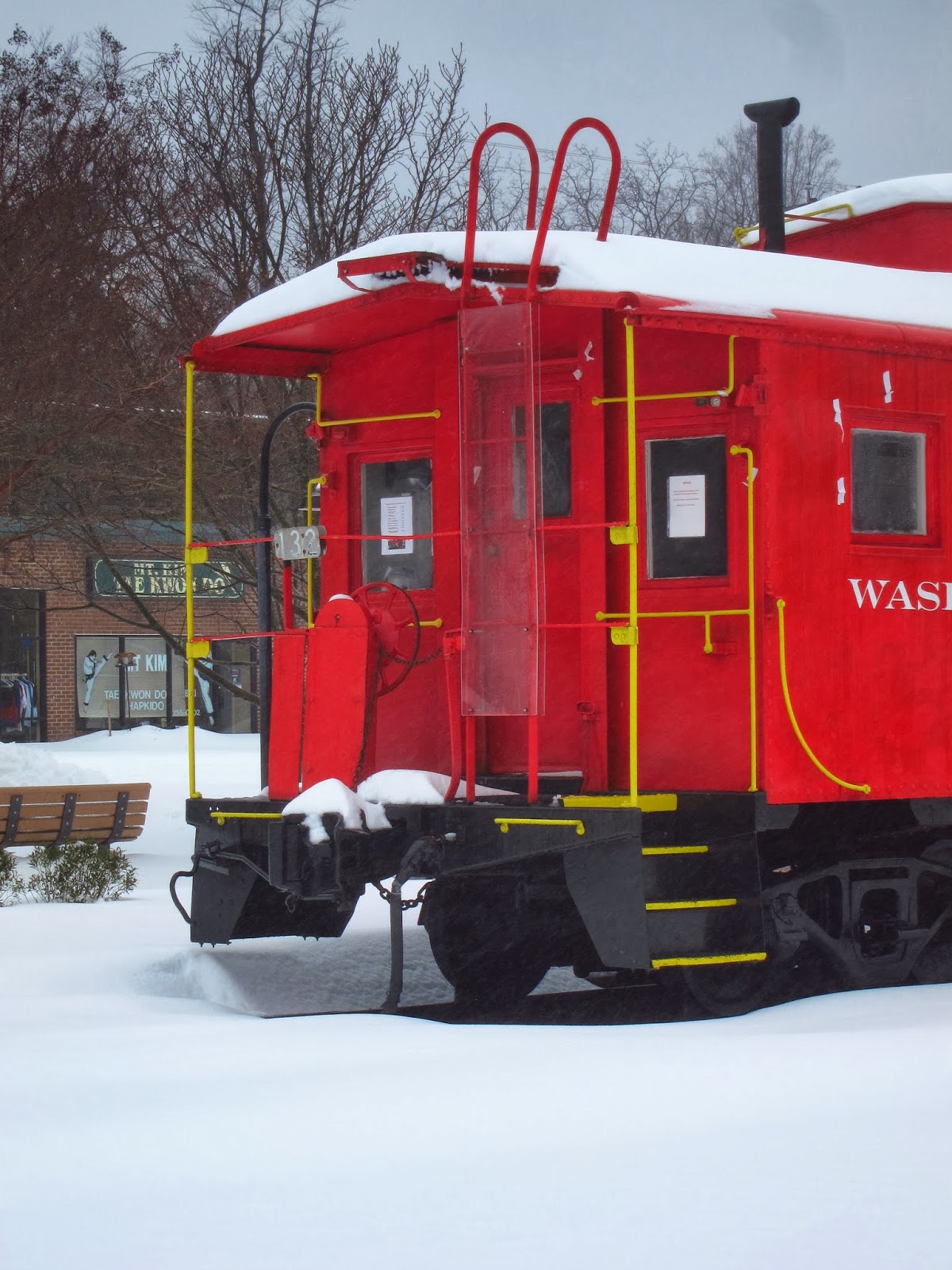 The last couple of winters here in the DC area have been non-events as far as snow is concerned... a flurry here, a dusting there, and all of it gone too soon for my tastes.

But last night through tonight, we've finally gotten some real snowfall!  Not sure exactly how much right here, but around 10-12" would be my guess.  It's a pretty wet snow, and we had a spell of rain during the day today, so it's heavy and soggy, but still pretty.  It's changed back to snow now in the evening, so who knows how  much we'll ultimately have.

It's not quite up the levels of Snowmageddon a few years back, but it sure is nice to finally get some real snow. 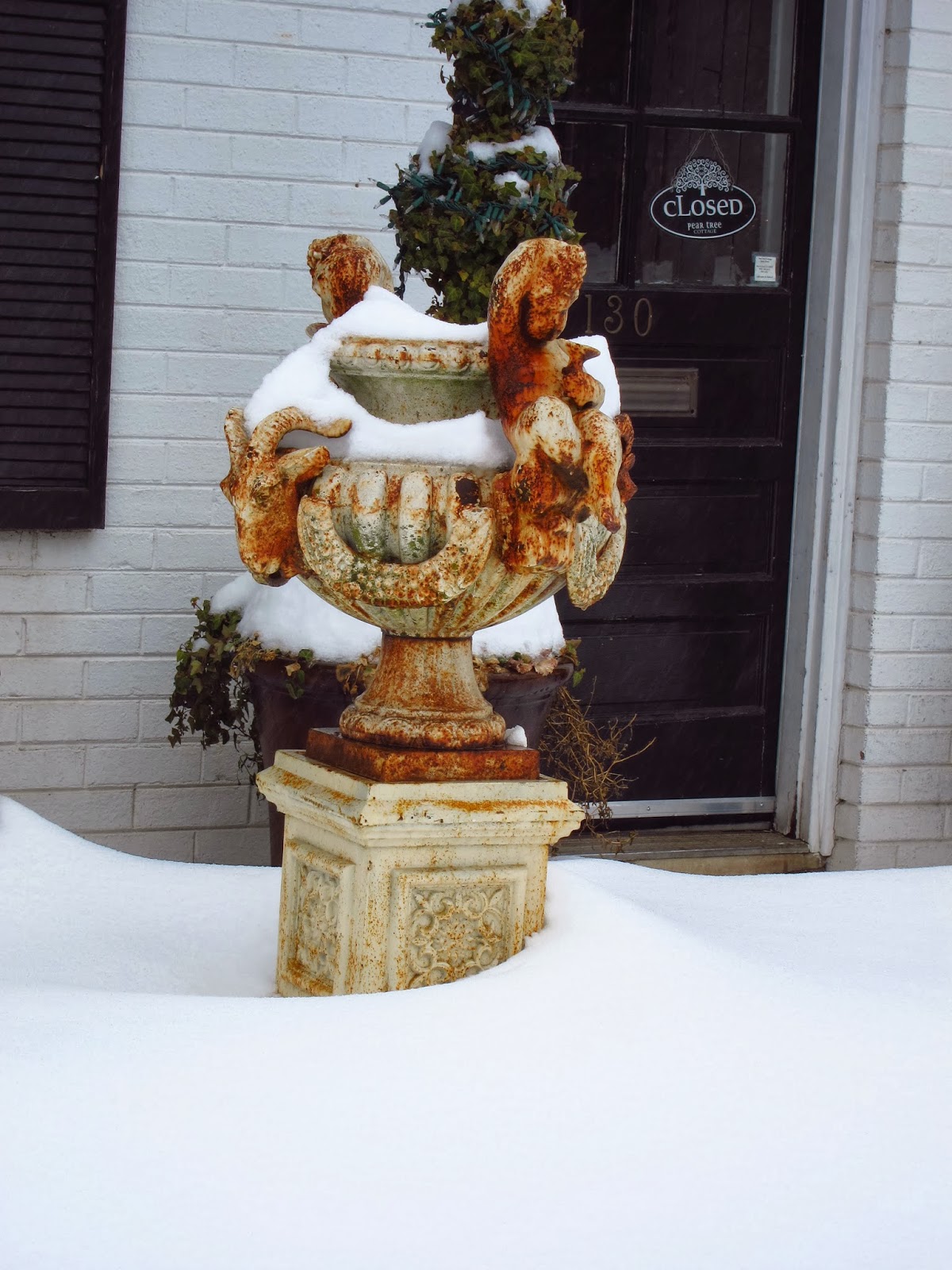 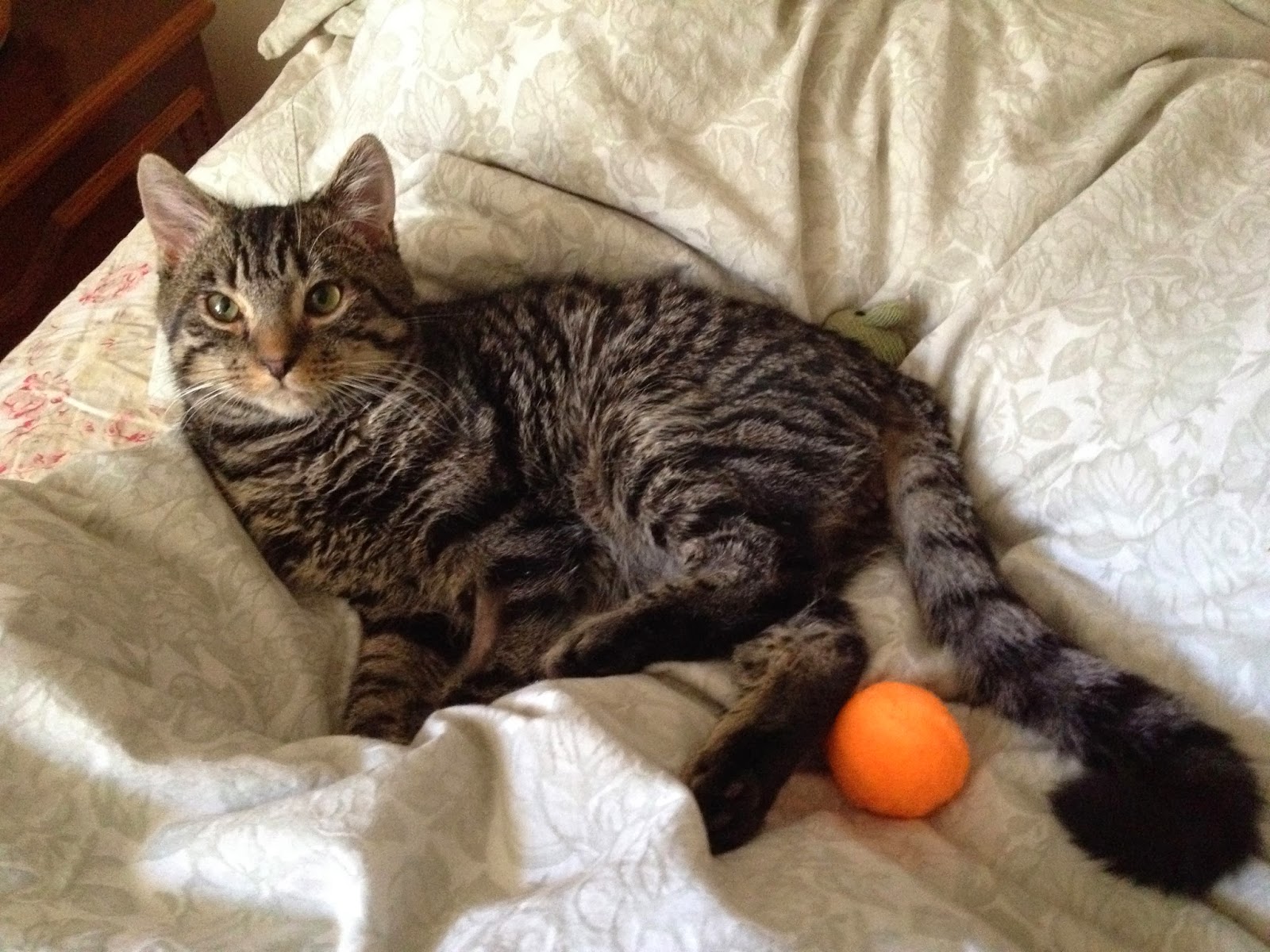 That's right, there's a new kitten in my life!  Folks may know I've had my little buddy Tybalt (who just jumped on the track pad and did a little editing I had to undo) since 2005, when I adopted him from a shelter as a kitten.  I'd been thinking of getting him a sidekick for some time now, as he spends a fair amount of time alone. Just before Christmas, my girlfriend and I stopped at a shelter in Maryland, in search of a companion for her parakeet... and while we were there, we checked the cat room.  Lo and behold, there was a very handsome little tabby, similar to Tybalt, but with distinctive markings. He'd just come in that morning, and they'd named him Tiny Tim, in honor of the holidays.  A few minutes spent getting acquainted, and next thing you know I'm filling out an adoption application!

The application was approved pretty quickly, given the holidays... but then trouble reared it's head.  The poor little guy had come down with an upper respiratory infection and had been moved into the "sneeze room" at the shelter.  The next several weeks were a bit of a nail biting time, waiting to hear he was well enough to be neutered and leave the shelter... and every week being told "maybe next week." At one point the shelter staff even brought up the possibility of euthanizing the little guy if they couldn't get him better!  Luckily after a trip to a vet's office and yet another round of meds, he was deemed well enough to get neutered and leave, so we headed to the shelter as early in the day as we could get there and scooped him up and took him to my girlfriend's place.  She offered to foster him while he finished getting well, as my vet said I shouldn't introduce him to Tybalt and my apartment until he was better.

So for now he's recuperating under her care, and is getting to know her two dogs, Rumba and Pogo, a little bit.  The dogs have been really good with him, more curious than aggressive, and he seems to not be intimidated by these very large creatures he's now among.  He's definitely feeling better, and eating better.  And showing all the typical kitten behaviors I had forgotten since Tybs was little.  The other night I was slowly drifting off to sleep, when I felt him leap from the foot of the bed to near my chest... then next thing I knew I was looking at the underside of a flying kitten, moments before he landed on my face!  Too funny, and too cute.  I can't wait to bring the little guy home to meet Tybalt... here's hoping they hit it off well!