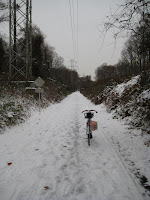 That's right! We had our first snow fall here in the DC area. My first ride in it was on Friday, going to and from work. I would have ridden on Thursday, but my winter commuter was already at work, halfway through a tire change and drive train swap. You see, I was changing over to my Nokian Hakkapelitta tires... studded tires! This will be my second winter with this brand, and my third (ish) on studs in general. It's amazing what a difference they make on snow and ice. Last winter we had one snow fall where it froze to a solid crust immediately, and I rode all the way to work without a single slip, rolling atop the crust, never breaking through. 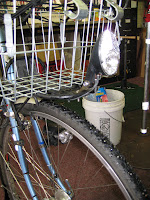 This first snow fall this year was pretty tame, and the trails are already clear as of Saturday night, as near as I can tell. But it was a fun ride on Friday.... I had to get used to it again, after the months of normal riding. Honestly, you fall back into it pretty easily, once you get past the initial tense moments. That's one of the keys to riding on snow and ice... don't tense up! And having the studs gives a measure of confidence that helps with that.

The picture to the right shows the front studded tire, as well as my front basket and Lumotec dynamo-powered light. The bike is an early 80s Miyata 210. 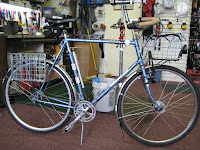 The other change I made to this bike this week is to change out the back wheel for a wheel built around a Shimano Nexus 8 speed internally geared hub. Folks about my age or older will remember the old English 3 speeds from Raleigh, Phillips, Rudge, and others, with the wonderful Sturmey-Archer hub. The Nexus is a modern descendent of sorts... only it has 8 speeds intead of 3! This means it's a lot easier to get a high enough high and a low enough low, with reasonable steps between gears. And all the workings are sealed up inside the hub, away from the elements, and less prone to damage. I've wanted to set up a bike like this for a while, and a deal on the back wheel came along I couldn't refuse. If you look closely at the picture on the left, you can see the hub, and also see the shifter on the right end of the moustache handlebar. The Shimano Revo shifter won't fit on a road style bar normally, but I bought an adapter called the Hubbub that plugs into the end of the bar and gives you a smaller diameter section to attach the shifter too. Pretty neat, but pretty spendy. I've only ridden the bike couple of days now, but I like it so far.
Posted by Tim at 11:24 PM 3 comments:

Yep, Wednesday Tybalt got his stitches out, and he's basically back to his old self! Well, it's going to take a while before the fur on his hip grows back, but he's acting like the fuzzy little bundle of energy I know and love. I let him outside for the first time in over a week, and he was so excited! At first I don't think he believed he was really going to be allowed out... he looked like he thought it was too good to be true. But once he was out... in snow, to boot... he loved it! He ran around, pouncing on the snow, and wrestling with it, and just generally loving being outside again! Woo hoo! He didn't want to come in, but dinner won out. It was so good to see him having so much fun and feeling good.
Posted by Tim at 12:11 AM No comments: