In a few hours I board a flight for my first ever trip across the Atlantic! Staying in England for a week, with the primary goal of riding in the Brompton World Championship, a fun-looking race around the grounds of Blenheim Palace (birthplace of Winston Churchill) in Oxfordshire. Watch this space for news upon my return. Watch From the Pocket (the bikes@vienna blog) for Twitter updates as I post them.
Posted by Tim at 2:18 PM No comments:

A Day at The Beach 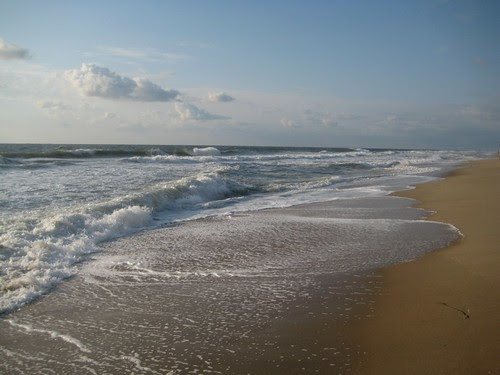 Well, it's taken me far too long to write about it, but last week I got the chance to spend a day at the beach for the first time in a long time. One of my sisters rented a condo out in Ocean City, MD, one of the recreational destinations of my youth. I even spent the obligatory "summer at the beach" there, back in my college days. That proved to be a lot less fun than anticipated, but I'm glad I did it anyway. Nowadays, I prefer my beaches less developed and crowded... come to think of it, I always have... but a chance to stay overnight for free was too good to pass up, so last Tuesday I headed over there. 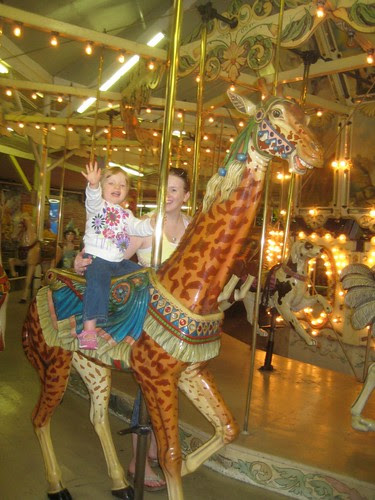 I got a late start on my day, so I didn't arrive until early evening, and to top it off, I timed my arrival to coincide with a pretty good storm that parked itself over the coast. Most of my stay, from Tuesday evening to Wednesday evening, it rained. But that didn't dampen my enthusiasm (groan)... I still had a great time. For one thing, I got the chance to spend a good chunk of time with my sister and my niece for the first time in a very long time. And I also got to spend time with my niece's kids... two year old Becca and three month old Abby. Beautiful kids, and Becca was a lot of fun to take to an indoor amusement park on the boardwalk with kiddie rides. She really enjoyed all but one ride, but the carousels were clearly her favorites. You can see her here smiling and waving as she goes by. 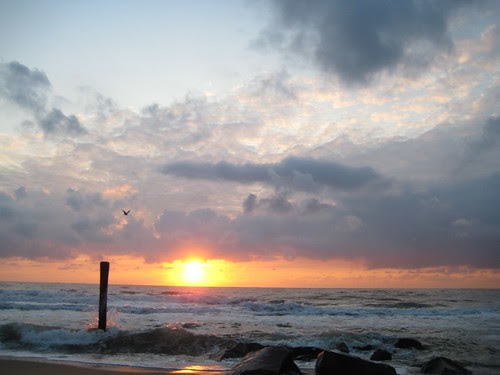 Aside from the family time, I also took the opportunity for some quiet, solitary time, something I truly enjoy at the ocean. First off, I rose early on Wednesday to see if there was a sunrise worth watching. With the rain during the night, I wasn't optimistic, but it turned out to be a lovely morning. And I do love watching the sun rise from the ocean. It may sound silly, but it's sort of reassuring to see that it is "still working" when that ball rises out of the sea. Besides, it's a very quiet, beautiful time at the ocean, no matter how busy a beach it may become later in the day. I walked a couple of hours, taking lots of photos, watching the sun, the gulls, the sandpipers, the sea, and one little Shetland sheepdog, intent on herding the ocean. 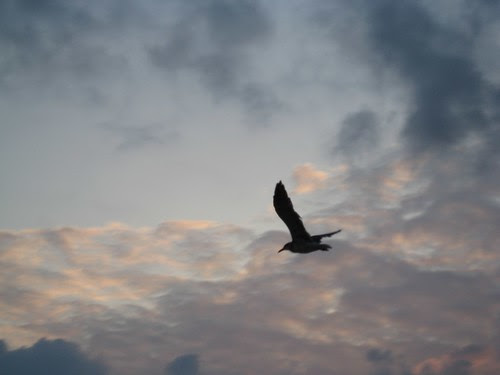 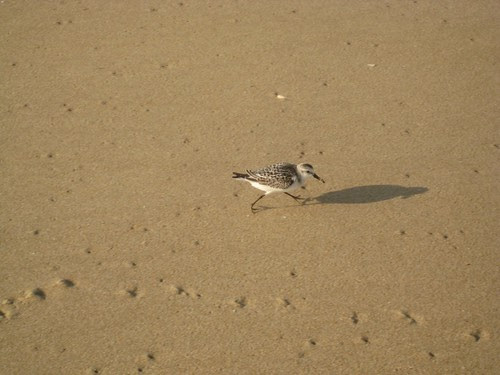 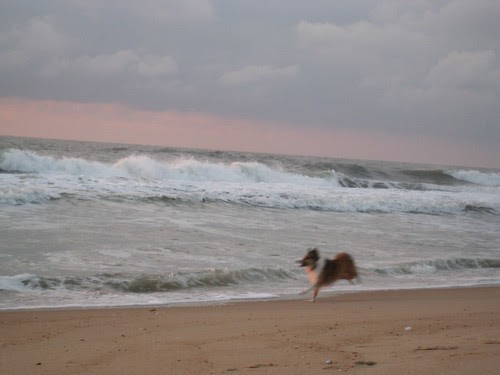 Before I left the shore, I wanted to stop in at one of my favorite spots, not far in miles but very distant in feel from Ocean City. The place is Assateague Island, famous for its wild horses. I first learned of the island from reading Marguerite Henry's Misty of Chincoteague, and Stormy, Misty's Foal as a kid... I was one of those kids that read all the "horse books" I could. Legend has it (fueled in part by the Henry books) that the wild horses are descendants of ponies that came ashore from a shipwrecked Spanish galleon, on it's way to mythical gold mines in the New World. Historians say it's much more likely they are simply descended from farmer's animals that got loose, but the galleon story is more fun to imagine. Either way, it's delightful to see these wild creatures among the salt marshes. 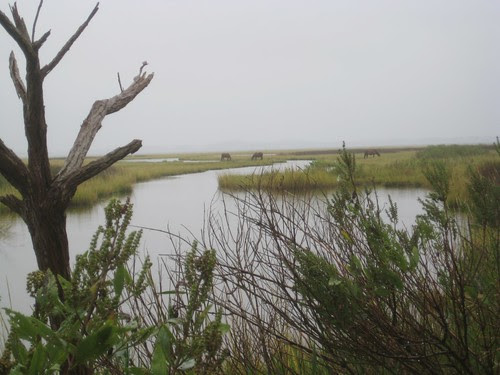 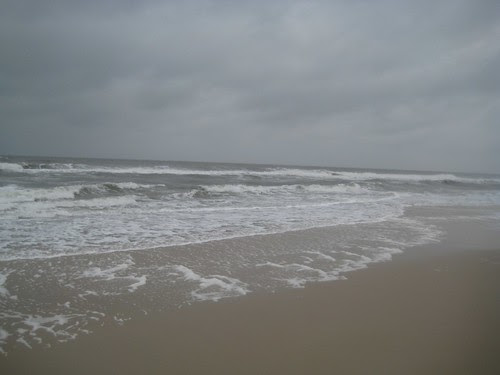 It's also wonderful to explore other aspects of the island... wide, often deserted beaches, windy dunes, wetlands full of waterfowl, and thickets of loblolly pines. It's particularly striking how wild a place it feels in contrast to Ocean City, which can be seen in all it's neon glory from the beaches of Assateague. And it's all the more remarkable that it's stayed so wild, considering that there were roads and houses there in the 50s and early 60s, and plans for further development. It all came to an abrupt halt when a major storm blew in in 1962, flooding the island. Afterwards, it was decided to cease development and turn the island into a National Seashore, preserving precious wetlands, dunes and woods for the wildlife there. You can still see the remains of the one paved road that was there before the storm. 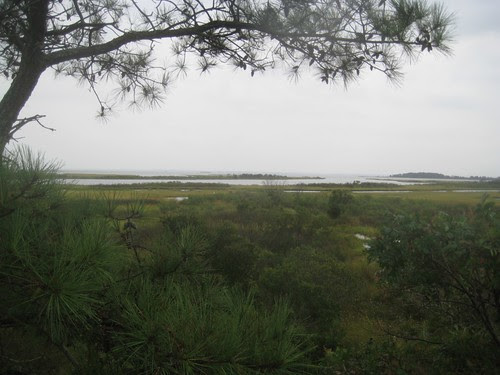 In addition to the ponies, there are Sika deer, a tiny little species you don't really see anywhere in the US except the Delmarva penninsula. There are also a wide variety of birds of all types... I've seen herons, egrets, hawks, gulls, sandpipers, terns, etc, as well as heard whippoorwills at night while camping there. I've not yet tried it, but I hear that one great way to explore the more remote parts of the island is by water, in a canoe or kayak. I'll have to try that one day. 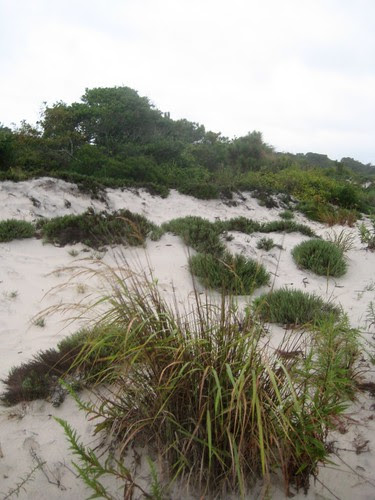 All in all, a beautiful place... and one of my very favorite places to visit the ocean. The solitude (except in the height of summer), the quiet, the wildness of it... all just resonate with me.
Time with family, a beautiful, quiet sunrise walk, and a few hours at a favorite island... truly a wonderful 24 hour respite.

Tonight, while riding home on the Brompton, I had one of those small "first" experiences that make me smile.
I see a lot of deer along the paths I ride, especially in the evening. And lately, I've seen a good sized buck on a number of occasions... a "six-pointer" (meaning he has six tips on his antlers) at least. I've seen him on the trail near where I live, and even in the back yard once or twice (my cat, Tybalt, was very excited at this!). I've even gotten fairly close to him without him running off... but tonight was the best.
My route home consists of a short stretch of town street, then a paved, multi-use trail. From there I turn off onto a narrow paved trail, over a creek, which then turns into a dirt path for the final leg home. Tonight, just as I was about to reach the dirt portion, I saw the glow of eyes in my headlight beam. Now, this isn't uncommon in itself... it happens often in fact. But something struck me as different tonight, so I kept my light (mounted on my helmet instead of the bike) aimed at the eyes as I drew nearer. It soon became clear what was different... the eyes were lower to the ground than I would have expected... because the deer was lying on the ground, resting... and it was the buck I have seen many times now.
I've never seen a deer at rest like this before, so I slowed down, and spoke softly as I drew nearer. I do that... when I see an animal when I'm out and about, I tend to talk to them, quietly, to try to let them know I'm not a threat. It may be silly... it may have no effect at all... but it seems the right thing to do, and I do it without thinking now. And tonight, for whatever reason, the buck just rested there on the ground, in a little thicket in the woods, as I slowly rode by, and told him I meant no harm.
Beautiful creature... beautiful night... a gorgeous full moon...
Posted by Tim at 12:56 AM 2 comments: 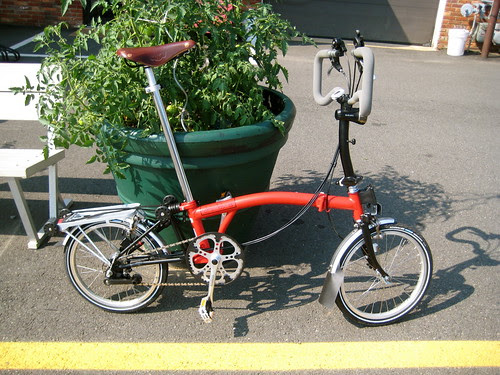 We hear it a lot at the shop, and just last night, while rolling the Brompton through my local Whole Foods, a woman asked me "Is that one of those collapsible bikes?" I explained that yes it was, and that it was really fun and convenient, and she seemed to think it was pretty cool too.


But "collapsible"? Well, sure, strictly speaking the word is correct... but it conjures up images in my mind of my bike abruptly reducing itself to a tangled, messy heap beneath me as I ride. That's why I prefer "folding bike" or "folder", or perhaps even "foldable bike" as a term to describe it.

Whatever you call it the folding bikes are a very handy thing, and they keep improving every year it seems, with new designs and refinements of old designs. The Brompton is pretty well evolved now, having been around for around 30 years, so changes are minor from year to year it seems, but most welcome. Mine has the new BWR (Brompton Wide Range) hub from Sturmey Archer, which combined with a very simple two sprocket derailleur system, gives me a very wide and comfortable gearing range.

And folders are a growing part of the market it seems too. I see more and more of them on the roads and trails here, and more and more stories in publications and on the web keep cropping up. I suppose one sign that folding bikes have "arrived" is that the latest Bicycling magazine has a full article about one man's adventures with folders. It's a quirky sort of story, but it's a sign of their growing popularity that they gained such recognition in a major cycling magazine in the US. 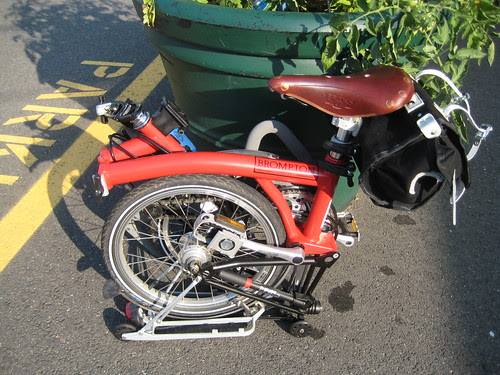 Me? I own two folders now, my Dahon Hon Solo single speed (a limited edition model I just couldn't resist), and my Brompton P6R that you see here, ready for riding, and folded. And in October I'm off to England to ride in the Brompton World Championship... 600 well dressed lunatics racing around the grounds of Blenheim Palace on Brompton folding bikes! Should be fun! Watch this space, as well as the bikes@vienna blog, and our Facebook page, for updates on my prepations. Oh, and I've started "tweeting" about it too. Stay tuned!
Posted by Tim at 9:33 AM 2 comments: