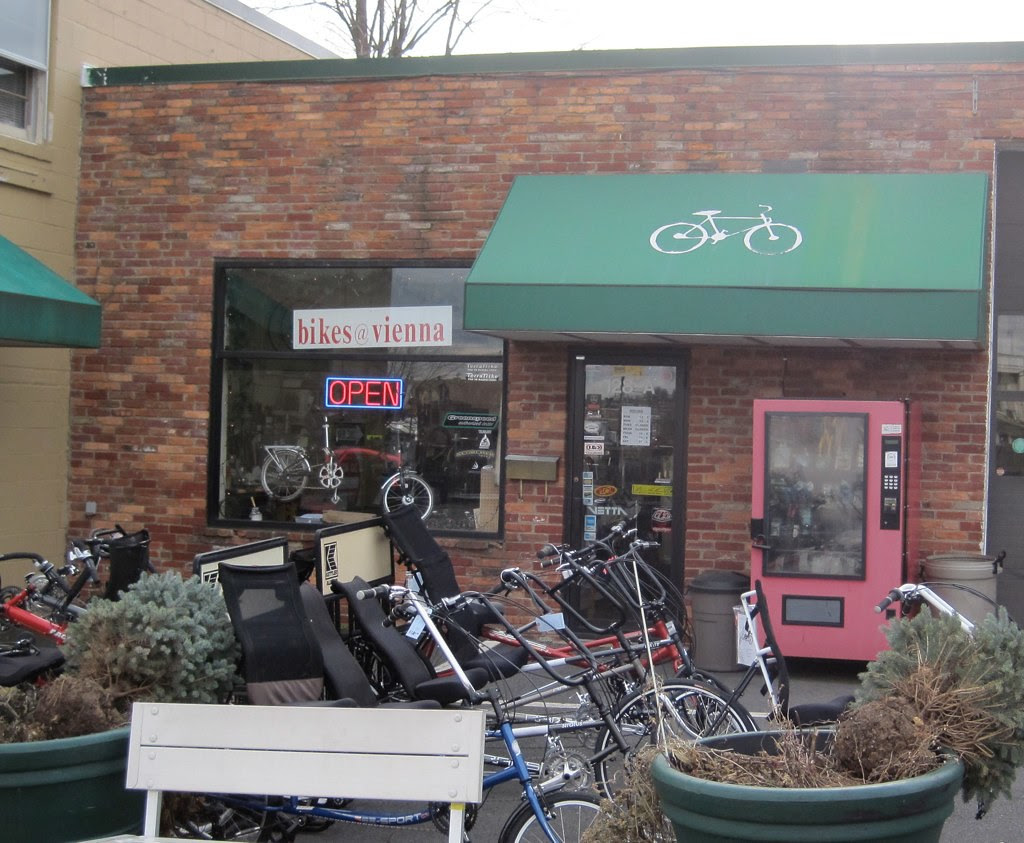 Hey gang! I've written a little bit about some changes in my life here, but I haven't sat down to write about the biggest change. Until now.
Regular readers know that I've been working as head mechanic at bikes@vienna for a little over five years now. Well, that's all changing now. No, I'm not leaving the shop! Rather, John Brunow, founder, owner, boss and friend, has moved back to Iowa, where his parents live and where both he and his wife Ces grew up. In fact, they'll be living in the very town where Ces grew up, in a house built by her grandfather, with the very same phone number she had growing up.
So what's that mean for me? It means that I am taking over ownership and operation of a bicycle shop, something I've idly thought about on and off for years, what with my love of cycling. I don't know that I ever really expected it to happen, and certainly not in this manner, but it's a wonderful opportunity and I'm excited and honored that John put it in my hands. I have a lot to learn, but I've been lucky to work with good people, both here and at the Community Cycling Center (Hi Beth!) in Portland. And I was lucky to have found some small business counseling services that offer free or nearly free classes, counseling and support here in Northern Virginia. I'm also fortunate to have good people working for me, which makes a world of difference.
For those that don't know, bikes@vienna is an unusual shop. I like to tell folks that "we sell what other shops don't", and that's pretty accurate. You won't find a road bike in the shop, unless it's a customer's bike in for repair, or one of mine. Nor will you see mountain bikes, though you might see a few bikes that vaguely resemble mountain bikes. We don't even sell the ubiquitous "hybrid" style of bike that's the bread and butter of most shops.
What do we carry? Primarily a mix of folding bikes and recumbent bikes and trikes, with a few other oddballs mixed in, such as the Rans "crank forward" bikes, a sort of semi-recumbent. Those of you who are regular readers can probably guess which way I lean, since I've rhapsodized so much over my Brompton and folding bikes in general. I do love the folding bikes, and am quite the Brommie enthusiast, but I think the recumbents are very cool too. If you've never tried one, get to a shop that has a variety and spend an hour or two or three riding. Compared to conventional bikes, the range and differences in design are really striking. I'll write more on that in the future, but for now, suffice to say our selection is quite varied.
So as I move forward on this new (to me) venture, watch this space for the musings and thoughts and joys and challenges of a small business owner, as well as the regular stuff you're used to reading. And if you're in the DC area sometime, please stop on by. You'll find a quiet, low-key shop that has a unique blend of products, services, and staff.
Posted by Tim at 8:45 PM 11 comments: