And where the heck did it go?

And what the heck have I been up to?  Clearly not writing, at least here.  Sure, I've been writing my usual column for the Vienna Patch, and short posts for the bikes@vienna blog and our Facebook page, but that's about it.

So, I've decided to try to get back in the swing of writing, starting with a recap of what I've been doing all summer, starting with my latest adventures... 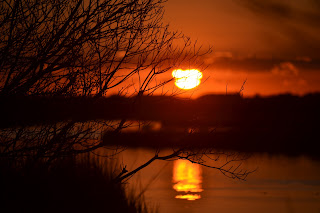 The photo above is from the northern end of Assateague Island, in Maryland. I've loved Assateague and neighboring Chincoteague for about as long as I can remember. Between a dimly remembered childhood visit and reading Margueurite Henry's Misty of Chincoteague and her other related books about the islands' famous ponies, coupled with the simple natural beauty of the islands, it's a place I can go back to again and again. Luckily for me, my girlfriend feels the same way, so last weekend off we went to camp on Chincoteague Island, at a campground right outside the National Wildlife Refuge.

Now, folks who know me, or who have followed this blog, know that I really like my Brompton folding bike, so it should come as no surprise that we each brought our Bromptons on this trip. A bike is a great way to explore the islands, and the packability of the Bromptons makes them an ideal addition to any trip there. An added bonus was that cyclists aren't charged the usual entry fee for the Refuge, saving us about $15 a day!

While it was a short visit, we packed in a lot of fun. The Refuge has beautiful beaches, and after Labor Day, the crowds really drop off. There's also a hike/bike access point for the beach that puts you about a mile north of where most folks park their cars and hang out on the beach, so it was pretty easy to find a deserted stretch of beach. We had gorgeous blue skies, and saw lots of gulls, terns, plovers, and sandpipers. We even spotted a few bald eagles, including a young one, not yet fully in its adult plumage. Such a beautiful, (relatively) unspoiled place.

The bikes also gave us the opportunity to explore the marshes, since there's a lovely multi use trail that winds through them and links up to the beach. The salt marshes there are just alive with all manner of critters, most notably wading birds and wild ponies. The ponies are hard to get close to, but the birds are everywhere. I've never been anywhere with so many snowy egrets... such beautiful birds. We also spotted some of the diminutive Sika deer (an Asian species introduced to the US at some point) Assateague is also known for.

No trip to the islands is complete without a visit to the quaint town of Chincoteague, a classic little island town... once primarily a fishing/oystering village, now a vacation destination. While it certainly has its share of touristy shops and restaurants, Chincoteague has largely avoided the sort of over-development that has ruined (in my opinion) so many beach towns. It's a sweet little place to tootle around on a bike, checking out small art galleries and book stores (of which there's an extraordinary number).

The only negative to the whole trip was the bugs. Thanks to a lot of recent rain, we were warned that the mosquitoes and flies were particularly bad. Luckily the wind was strong enough at the campsite that we weren't too bothered by the mosquitoes there. And the flies were really only bad at the beach, and really only bad on one of our several long walks... but they were VERY bad that day. Neither of has has ever seen anything like it... basically we were shadowed by a swarm of flies the entire two and a half hours we were out. And while they didn't land too many really serious bites, it was pretty unpleasant to have them hovering all the time, and landing on us frequently. Still, we managed to have a good time, and it was otherwise a beautiful, sunny day.

And one positive, if strange, "side effect" of sorts... we got to see the aerial spraying of the town with insecticide. Why is that positive? Well, I'm an old plane buff, so I got a kick out of seeing that they were using a vintage Beechcraft Model 18, the famous "Twin Beech" of the '40s. Very cool. Unfortunately, by the time I grabbed my camera, it was too far for a good shot.

We wound up the trip by driving up to the northern end of Assateague, up in Maryland. I've been to that area a bunch of times over the years, more than to the southern end near Chincoteague, but my girlfriend hadn't been there, at least that she could remember. With no town and no real buildings on the island, and the nearest town some distance away, the northern end feels a bit more "wild" than the southern end. There we took a short beach walk, and saw several flights of pelicans, then went off in search of ponies. We didn't manage to sight any really close up, but it was still fun to explore the marshes, and we got to watch a beautiful sunset to boot. The perfect end to a nearly perfect trip! 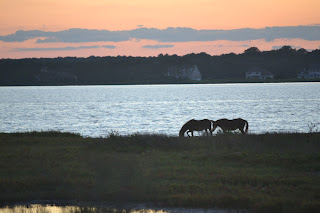