A Trip Down Memory Lane... 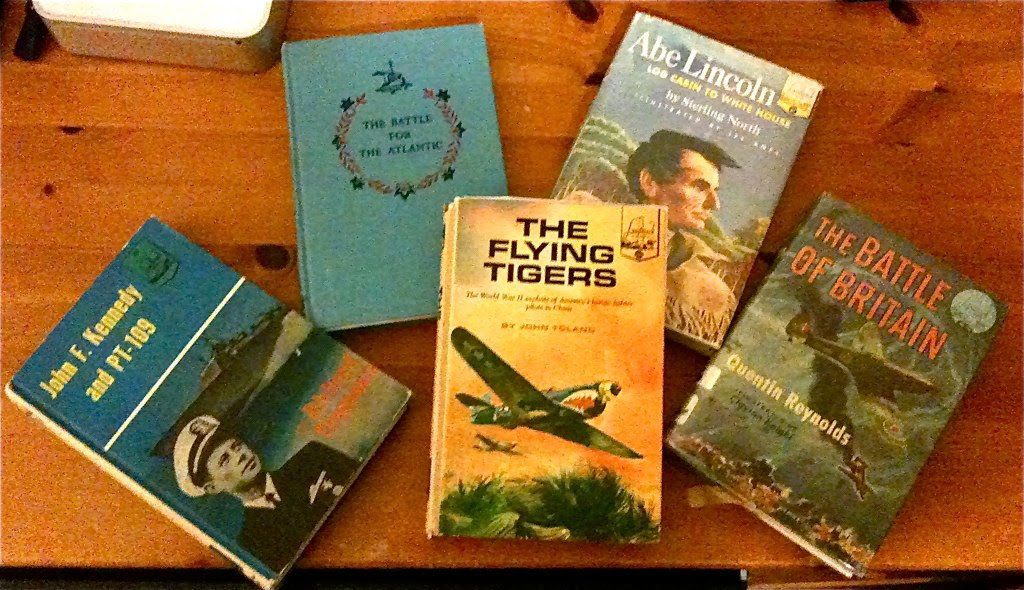 ... with books! Books that those of you of a certain age (can you say Boomer?) might very well recognize.
A while back I stumbled on a book in a library sale, Thirty Seconds Over Tokyo, in an abridged Random House Landmark edition, and it brought back fond memories of hours spent in the library as a kid. And I've spent a LOT of hours in the library, then and now. My mom worked in our local library as I was growing up, and I had the rare treat of being able to go into work with her and have the library to myself for a good half hour. Sheer joy for a kid who loved books!
The Landmark (and World Landmark) series of books were published by Random House in the 50s and 60s, written to a young audience (ages 9 - 15), centering on American and world history. I remembered reading a number of them when I was in elementary school, and I credit them with contributing greatly to my love of both history and reading, which I've carried through to this day.
So what did I do? I poked around online, learning more about the series, including the fact that it's apparently popular today with the home schooling folks. And I found other people who had fond memories of them, such as "The Boomer Child's Bookcase". And I corresponded with my brother and mother, both of whom remembered the series well. In fact, my brother (the first kid in the family) remembers having a subscription to the books as a kid... making me jealous in retrospect! So I decided to pick up a few of the books I remembered best, courtesy of Alibris.com, and it's been a lot of fun so far reacquainting myself with them.
One of the surprising things is how many of the images from the books I remember, both photos and artwork. The covers were particularly evocative, such as the one for The Flying Tigers, by John Toland. Which brings me to another remarkable aspect of these books... they were written by well known authors and historians, including Toland, William Shirer, Quentin Reynolds, Sterling North, Richard Tregaskis and others. And while they were clearly written to a younger audience, they don't read as if the authors are "talking down" to the reader. No wonder my brother and I grew up to be "book nuts" and history buffs. In fact, my brother even has a Master's degree in history, though he makes his living as a musician and music teacher.
So, how many of you out there remember this series of books? What era of history did you find most interesting? Due in large part to my dad's service in the Army Air Force in WWII, that era has been my focus, then and now, but I find any aspect of history fascinating. How about you? There's Gettysburg, by Mackinlay Kantor, and Paul Revere and the Minute Men, by Dorothy Canfield Fisher... or The Story of Atomic Energy by Laura Fermi and Exploring the Himalaya by William O. Douglas (associate justice of the Supreme Court and credited with preserving my beloved C&O Canal as a National Park). Please share any thoughts and memories you might have about these wonderful books.
Posted by Tim at 6:20 PM 3 comments:

Hey gang!
Time to catch folks up on what's been going on in my life of late. It's been far too long since I've posted, and a lot has happened.
First, as I had said in the last post, I've moved. I didn't know I was moving until shortly before I had to, but it's all worked out in the end. I'm now settling in to my new place... it's a roomy basement apartment in a single family home, with my own kitchen, living room, dining area, bedroom and bath. It's a little farther from work than my last place, but that's ok, I was kinda thinking I wanted a little bit longer ride to work, so I got that.
My little cat Tybalt is also settling in, feeling more at home every day. For those of you who have never owned a cat, trust me, change is NOT their favorite thing in the world. From the time I first started boxing things up, through the process of moving out, staying in a temporary place for a week, and moving in here, he's been a bit freaked out. In my old place he spent most of his time hiding in the rafters.... once I moved here, he burrowed under my blankets whenever I wasn't here, as near as I can tell. But for the last week or so, he's been out and about in the apartment when I've come home, so that's a good sign.
In the middle of all of that, there was the Vienna Halloween Parade, and as always, bikes@vienna made a splash. This year, John's goal was to get as many trike owners as possible to come and hook up their trikes into one giant train, aiming for 25 trikes in all. And I was hoping to assemble a "Brompton Brigade" of Brompton owners, riding and folding their bikes along the route.
Well, neither of us really met our goals, but we still had a lot of fun and made a memorable sight. We ended up with two trike trains of about a half dozen Sun EZ "delta" style trikes, which made quite a sensation looping and circling down the street. On the Brompton side... well, there were only two of us, myself and Christy, who was decked out in a great witches outfit and had lighted plastic pumpkins hanging from her handlebars. In the end, we ended up with me hopping off and folding my bike, walking a short way, and unfolding and remounting, while Christy circled around me, now and then doing appropriate "Vanna gestures" to call attention to what I was doing. Even the announcer at the reviewing stand was impressed, commenting on both the trike trains and my "transformer bike", as he called it.
So far, I haven't been able to find any photos of us in the parade, much to my disappointment. I know folks were snapping photos, but I just haven't been able to track any down online. I'll post links if I find any, or if anyone out there knows of some, please let me know!
Posted by Tim at 8:35 PM No comments:

Hey gang!
I just wanted to let my loyal readers know that I have not fallen off the earth... I've just been in the midst of moving for a while now. I found out rather unexpectedly in late September that I was going to have to move, and the intervening time has been rather busy and unsettled. But I'm in my new place now, slowly unpacking, and getting back into something like my normal life. So please watch this space for future news! I promise to write more soon.
Posted by Tim at 10:46 PM No comments: