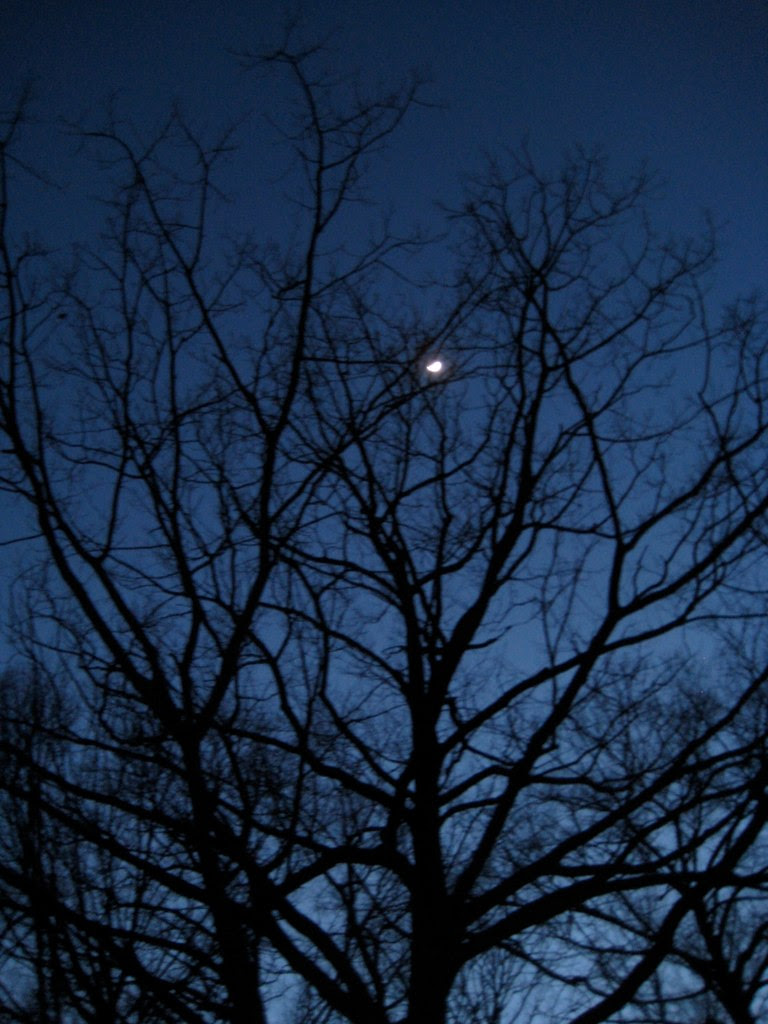 Just a lovely evening... crisp air, a crescent moon in a bright sky, and I spotted a Cooper's Hawk swoop into a tree just ahead of me at one point. I stopped and watched him for a minute, then he suddenly took off. As I followed him with my eyes, I saw another, smaller Cooper's coming from the other direction. They both made arcing turns to fall into parallel flight, then flew away into the darkening sky. Beautiful! Perhaps a mating pair, since the second one was noticeably smaller than the first.

Oh, and before you drive yourself crazy looking for the hawk in the picture above, he's not there. This is just a nice shot of the moon through the branches of a tree that I shot a few minutes later.
Posted by Tim at 11:43 PM 2 comments: 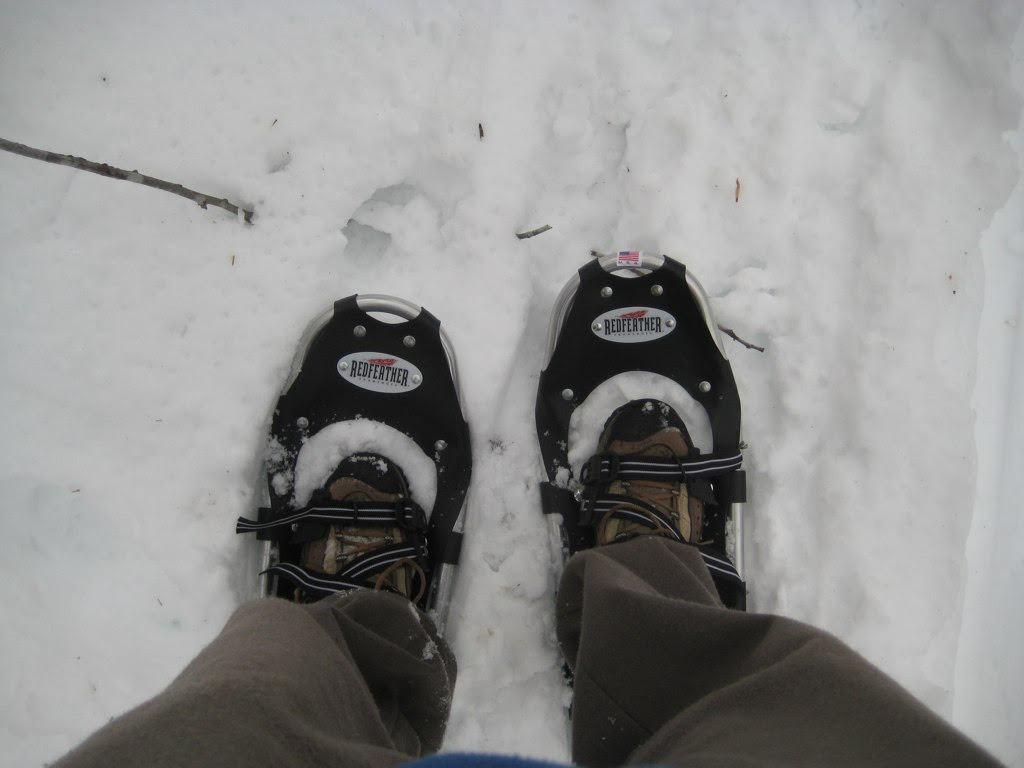 Yep, I did it. I bought myself a pair of snowshoes. I'd heard over the years from various folk how much fun they were, but never felt any great drive to buy a set here in the mid-Atlantic, where heavy snows are pretty rare. Then back in December we had a big storm... dropped around 20" here, which is a lot for us. And the first day I walked in to work after the storm, I saw a pair of women zooming along on their snowshoes as I slogged through the snow in my regular boots. It looked really fun... but geez, "there's no way we'll get another snow like this this winter" I thought. 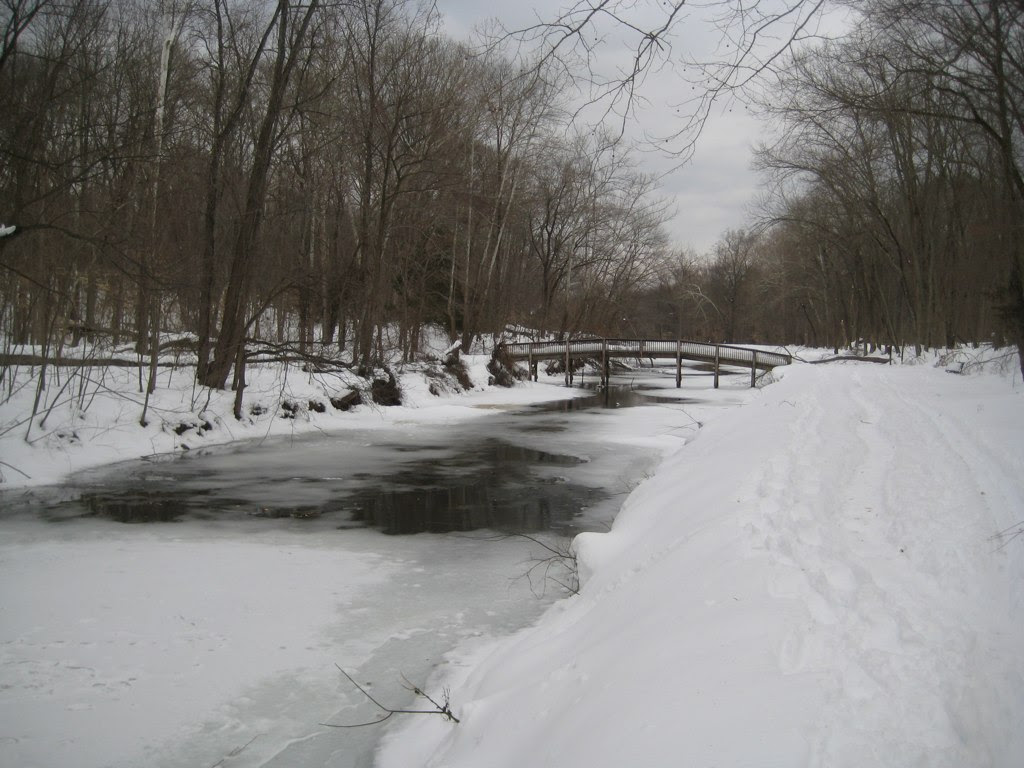 Well, um... we did! As you know if you live here, or if you've followed my blog. In fact in February we've gotten something around a total of 30" of snow, all in the space of a week. So as that series of storms was descending upon us, I decided to give it a shot and ordered a pair of snowshoes online. There were a few snags along the way... but yesterday around noon, there they were, thanks to UPS! So I decided to waste no time and headed out to try them out on... you guessed it, my beloved C&O Canal!

What a blast! It's an amazing sensation to be out in deep snow and to be able to walk ON it, instead of sinking deep and having to slog through it. It's all about surface area, I suppose, and these suckers have plenty of that. Sizing of snowshoes is based on weight, so for me a 30" x 9" snowshoe is the best choice. They look huge but once they're on, they're really not ungainly. Maybe it's because I read and heard many warnings, but I really didn't ever feel like I was having to work hard to avoid tripping on my own feet. I'd heard that was one of the adjustments you have to make, essentially adopting a wider than normal stance, but I didn't really have to think about it. Perhaps my mind and body compensated unconsciously, or perhaps I naturally walk a little bowlegged (I'm suddenly reminded of a recent Prairie Home Companion "Lives of the Cowboys" sketch... but I digress!). Either way, I found it easy and natural to walk in them. 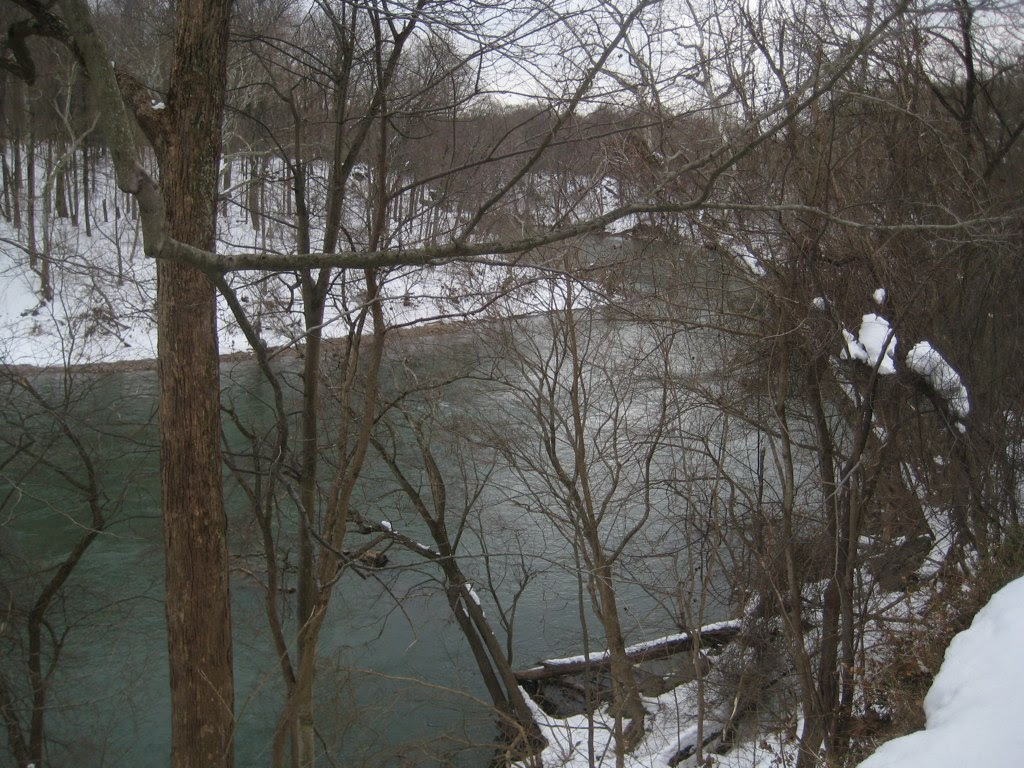 And what a gorgeous day! A little chilly, but not windy, and while it was mostly overcast, it was still lovely to be out in the snow in solitude. I think the whole two plus hours I was out I saw exactly two people, both on skis. The towpath was covered in snow, as were some parts of the canal, and the woods to either side wore it like a soft white blanket. View of the river were as always spectacular, and the water itself was an amazing shade of green. There were a lot of ducks out and about, and a couple of kingfishers (skittish birds!), and a fair number of deer. I managed to get a few good pictures of the deer, and even some nice shots of the ducks. Even the trees were remarkable, with their branches and trunks standing out in dark contrast to the snow. 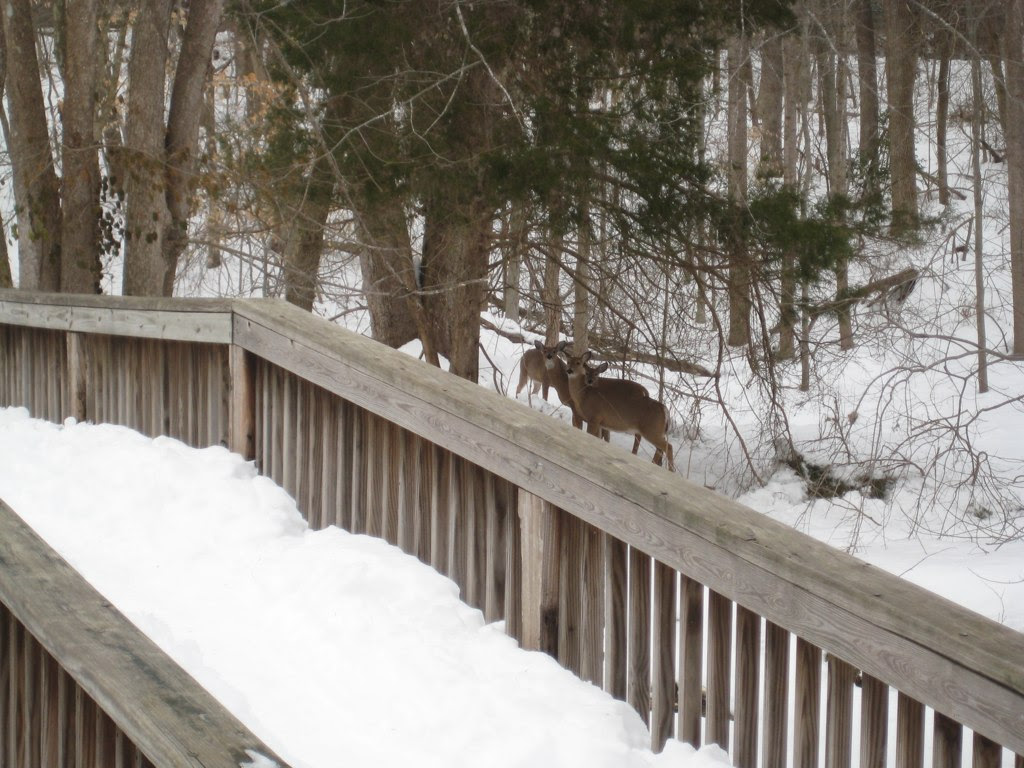 Take a look at the flickr album Feb 17, 2010 Snowshoeing on C&O Canal to see more shots, including a series of closeups I took of the severed end of a large, fallen tree branch. A surprisingly beautiful thing. 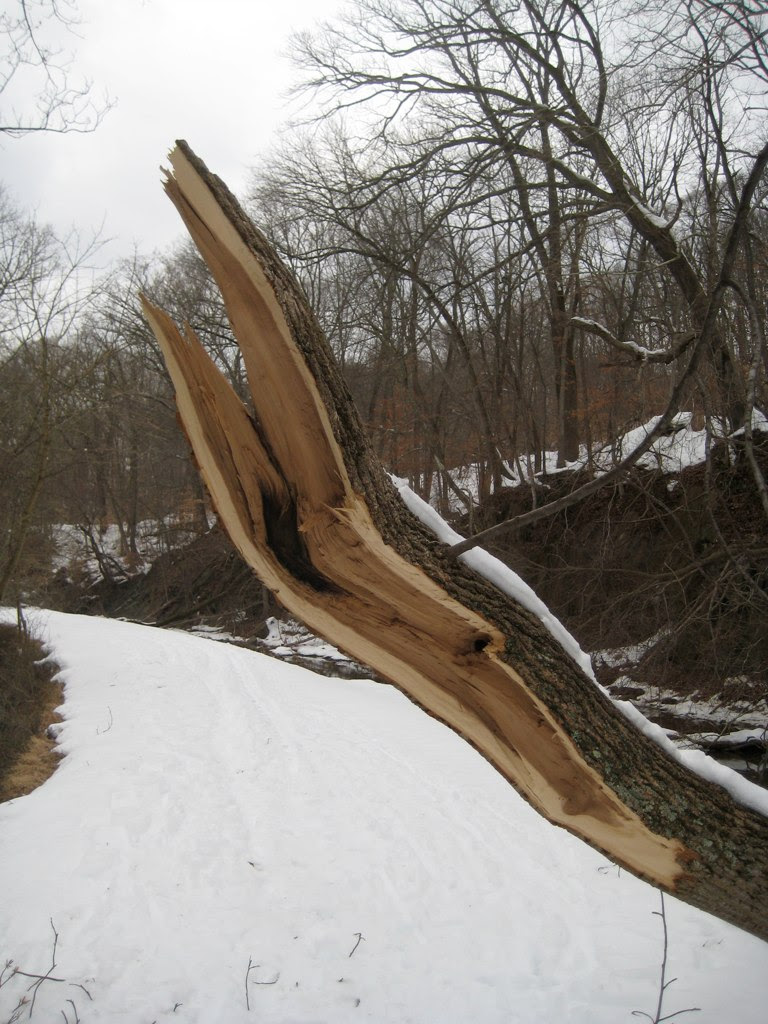 In the Immortal Words of Ron Popeil... 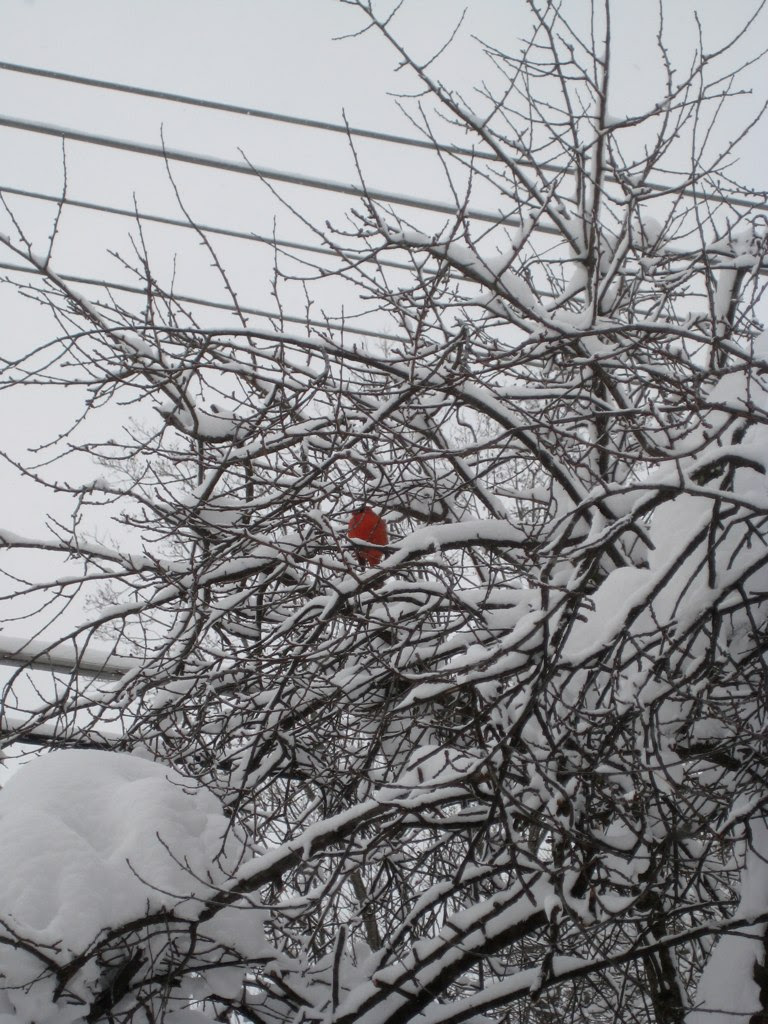 More snow that is. We were sitting here with about two feet, give or take, already on the ground, and then yesterday another storm rolled in, bringing with it somewhere around another foot of snow and lots of wind. It may still be coming down a little in some parts of the DC region, but I think it's now mostly the wind we have to worry about.

Anyway, I went for a nice long walk in the woods and around Vienna today, while it was still coming down. 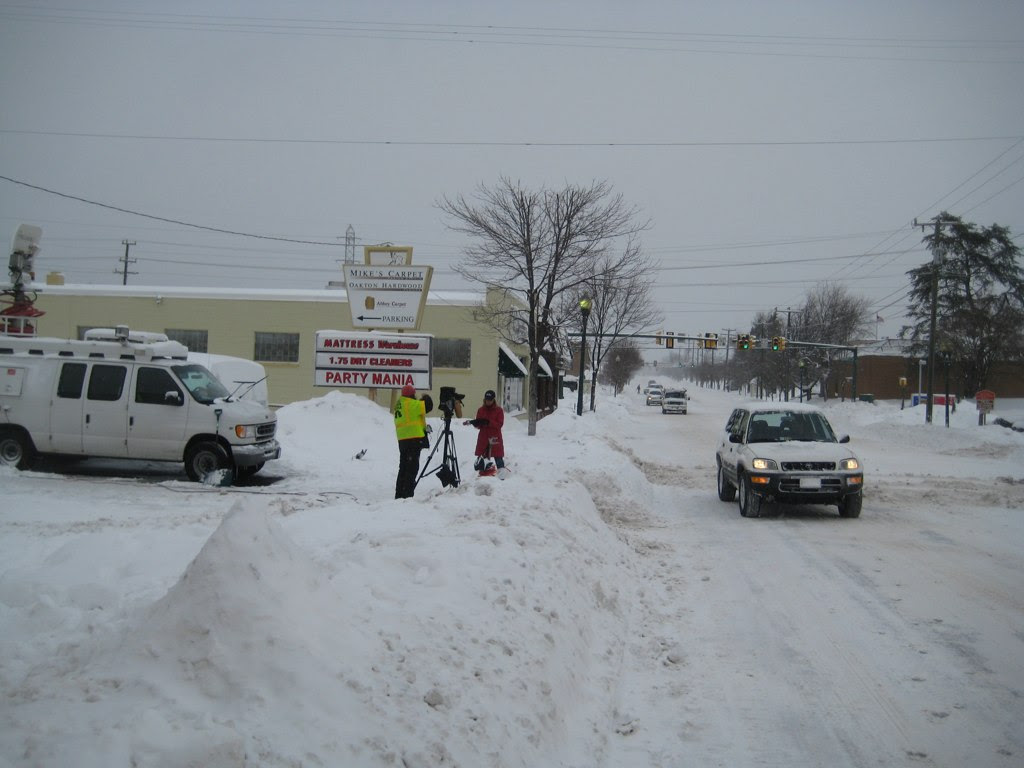 Apparently, the local NBC affiliate sent this reporter and her cameraman out to stand next to Maple Ave, in Vienna, and talk about the snow. We're weird in the DC area... weather is a major news story. I suspect any of you in the midwest are thinking "this is news????" 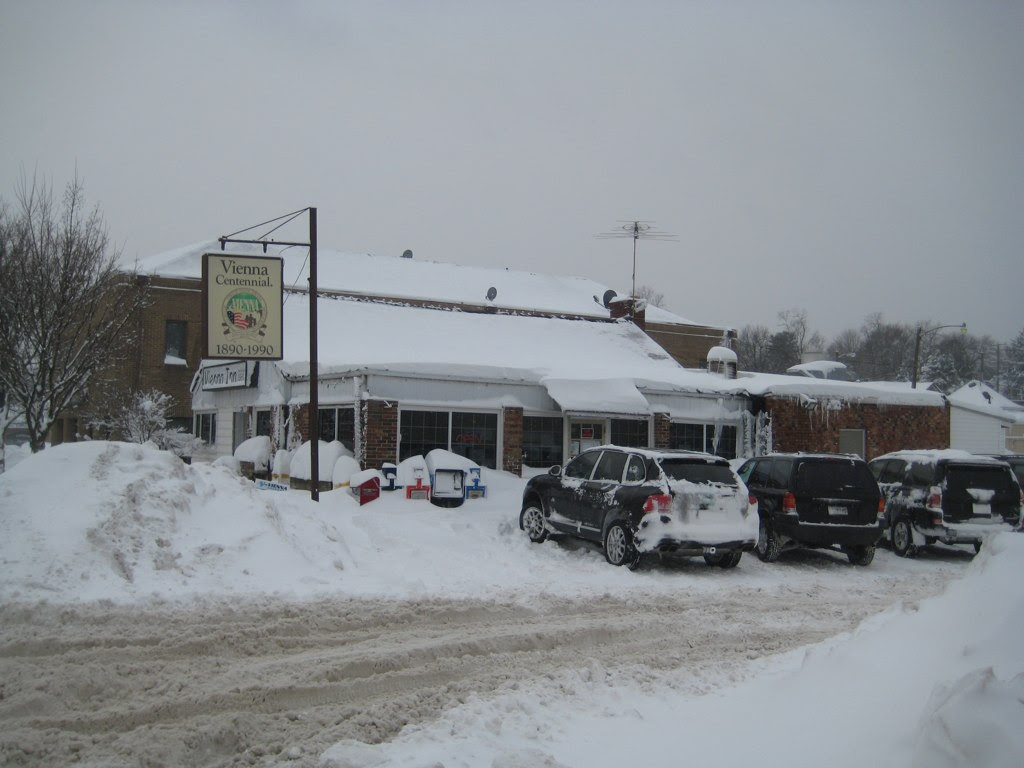 Anyway, one of the featured topics was apparently the Vienna Inn, a local institution, a tiny little bar/restaurant with great chili dogs that seemed to be the only open business in town. Note the number of cars in the lot... and I'm sure more folks walked! Busy day for them.


More photos can be seen here:

... of the big snowstorm of February 5th/6th. Click on the highlighted links below to see more. 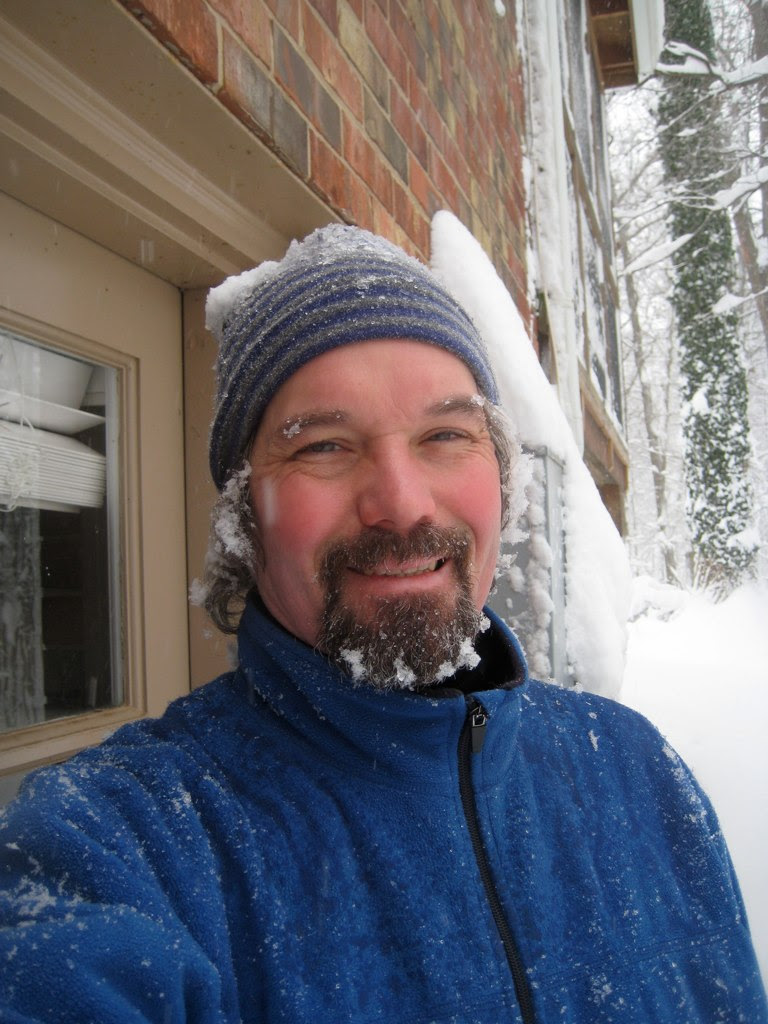 I went out on Saturday for a nice long walk in the woods behind my place, and took a BUNCH of pictures while the snow was still falling. It was probably a good two feet at that point, and I think we topped out around 30" here, but I don't know that for sure. That's me after the walk. If it looks odd, it's because my right arm is sticking out, holding the camera. 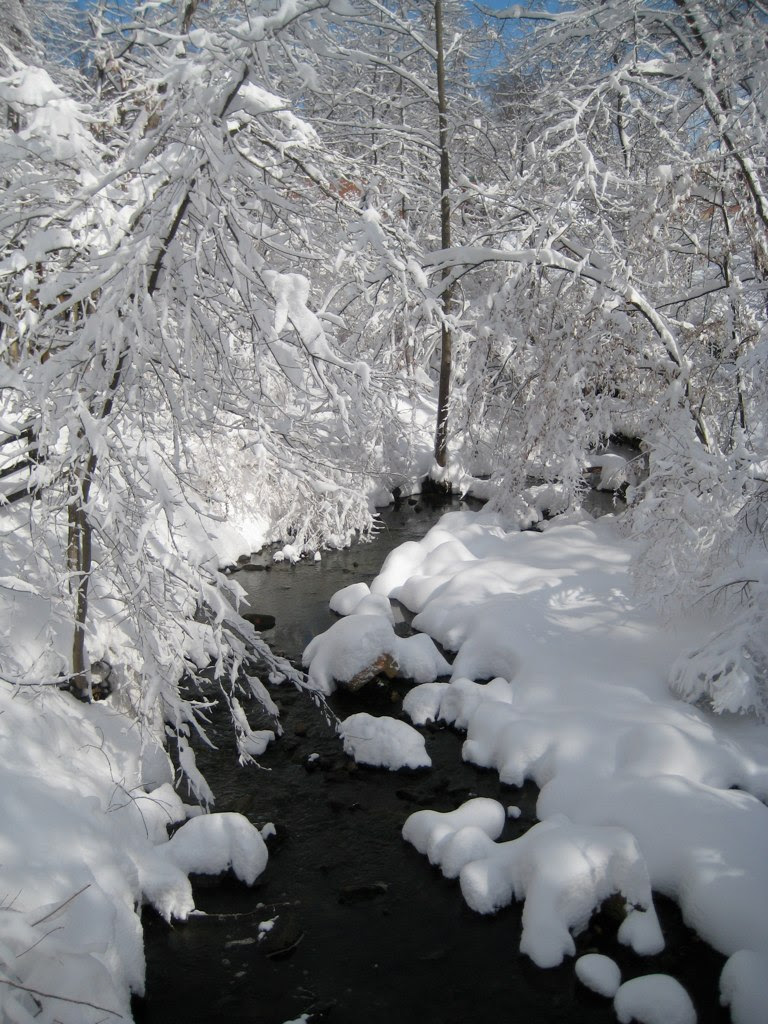 And here's a shot from Sunday, and my walk in to the shop. I'm lucky that a good part of my commute involves a walk through the woods. This is the small stream I cross every morning, looking very wintry and lovely.

This is an exceptional winter here in the DC area! We had a light snow on December 5th, then the big snow (about 20 inches in some areas) on December 19th. Then a light snow last Saturday... and more on Tuesday... and now, Friday, February 5th, a storm rolls in that promises to drop between 20 and 30 inches by the time it stops sometime Saturday! But wait, there's more... they are also predicting another storm next Tuesday, and then perhaps something else later in the week. This is not at all typical for this area, where we usually get maybe one or two snowfalls a year that amount to much (say, about 6 inches or so), and it's not unheard of to have none at all.

I walked home in it tonight, and will probably walk to the shop tomorrow. We're officially closed, but I may use the time to catch up on some projects. Folks have brought in some really interesting (to me, anyway) bikes lately, and it might be nice to work on them undisturbed. I suspect few people will stop by a bike shop in the midst of this storm. 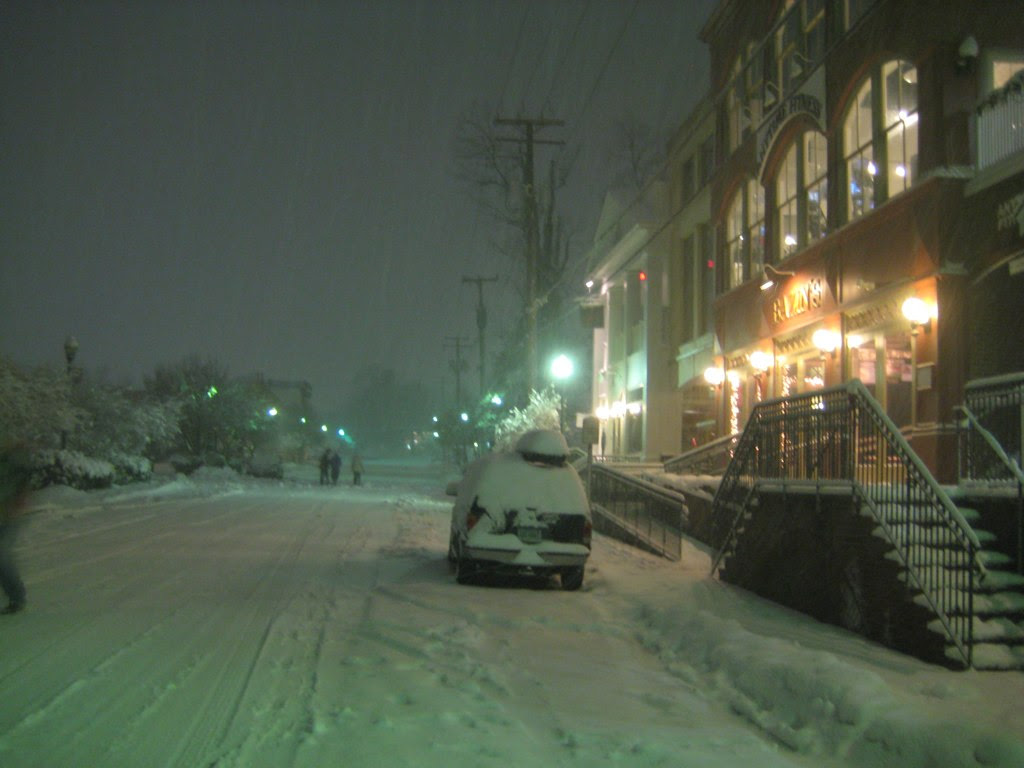