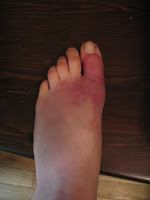 No, not the amazing movie with the spectacular performance by Daniel Day Lewis... I'm referring to my actual left foot. Ordinarily I wouldn't share photos of my feet... they're not my best feature, being generally big and bony. But today the left one is rather impressively swollen and red, due to a bee sting on Sunday. And it got me to thinking about my history with stinging insects, as this is the worst reaction I've yet had.

I was stung by yellowjackets on two different occasions as a small child, both times before I had reached my sixth birthday. Those two stings left a powerful impression on me, giving me a pretty strong fear of all stinging insects for all of my childhood, through adolescence and on into my adult life. Among other things the incidents persuaded me that the "don't bother them and they won't bother you" theory was, well, hooey. In the first case, I was performing the highly provocative act of carrying a stick of firewood (okay, maybe the little beast was on the stick and I disturbed it, but to my four year old mind I was innocent), and in the second I was stung while eating breakfast during my family's "summer of perpetual camping" that I will write about soon.

(The photo to the right is me with my big brother, Stephen, near the site of the first sting, no doubt before it occurred, because I think I look pretty happy in this shot... as near as I can tell from an old photo)


Anyway, I slowly got over my fear, helped in part by being stung a couple of times as an adult and realizing that some of the perceived agony was filtered through a child's mind. Not that being stung in the armpit while driving my VW bus at 70mph (yes, they can go that fast, on a good day) in North Dakota was fun... it just wasn't as traumatic as my childhood stings.

Then an exciting new development appeared... in my late 20s, I was stung in the leg by a yellowjacket on my honeymoon (ironically, this paled in comparison to the winch accident that put me in the emergency room on my wedding day, but I digress). It hurt like heck, but after a half an hour or so, the pain subsided and I went about enjoying a wonderful trip with my new wife (now ex-wife). The weird part was when my leg began to puff up and get very sore and red a couple of days later. I was told at the time that in dry seasons like we were having, wasp venom often is more potent, and that was probably why I had this reaction. It sounded reasonable to me, and I wasn't stung again for quite some time, so I didn't dwell on it.

Well, in the last 5+ years since I've moved back to the east coast, I've been stung a number of times by both honeybees and yellowjackets, and the pattern of owie!-pain subsides-swelling/red/itch appears began to reliably repeat itself. I didn't really think to hard about it, but I did notice that generally the yellowjackets cause the most severe reactions, and honeybees just caused minor swelling and itching a day or so after the sting. My sister's a nurse, and said it was just a mild allergic reaction, but to keep an eye on it and if it got worse, talk to a doctor.

So, this time around, I got stung on Sunday morning, and went through the usual swearing and swatting phase, then the dang-this-hurts phase, followed by the now-it's-not-so-bad phase followed by the huh-it's-swelling-a-little-sooner-than-usual phase.... followed by they damn-I-would-swear-I'm-running-a-fever phase... WHOA! Now that was a new one for me! My teeth were literally chattering from chills on a warm summer night, a sure fired sign I have a fever, along with the general aches and oogy feelings.

Which prompted me to take my first ever sting-induced trip to a doctor today. Where, after the absolute minimum of time and attention (gotta love American health care), I was told it was probably just a more severe, but still not serious (as in Epi-Pen serious) allergy. With maybe a tiny infection too. So I was prescribed prednisone and an anti-biotic I'm not even going to try to spell. And told to take Zyrtec as an antihistamine and ibuprofen as a pain killer in the future, both of which I knew already. I'm going to get a physical soon and discuss this further with a doctor who spends more time with me, but maybe it's just no big deal. But take a look at that foot... kinda scary if you saw that at the end of your leg, from a tiny little insect sting, no? 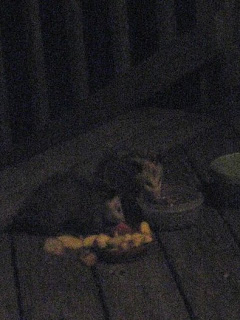 Well, tonight they were both there on the deck... two little baby possums, chowing down on cat food and apples. 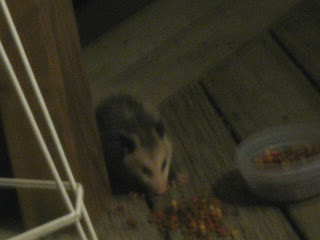 We kind of suspected it, since our little possum friend (now known as Pearl... don't ask me, ask Annie) looked to be a little chunky when we first saw her. She must have been carrying babies in her pouch, because a couple of nights ago, Annie excitedly called me over to the back door... where I saw Pearl and two little baby possums chowing down on the snacks Annie had laid out on our porch. We're soft touches when it comes to animals, and the theory is also that it will keep her outside and not exploring in the house for food. Who knows?

Anyway, there they were! Just hanging out on our deck and chowing down. We've seen the trio once or twice since then, but last night and tonight (Sunday) we've only seen one little one at a time, and no sign of Pearl. Not sure if it's the same baby each time or if they might be taking turns, or if mom is keeping watch somewhere while they eat, or what. We're hoping nothing bad has happened to her. In a residential neighborhood, there are a lot of hazards to wildlife, so who knows. We'll keep an eye out for her.

That's one of the little fellas in the pic above. I think his name is Elmo.
Posted by Tim at 12:34 AM 1 comment: