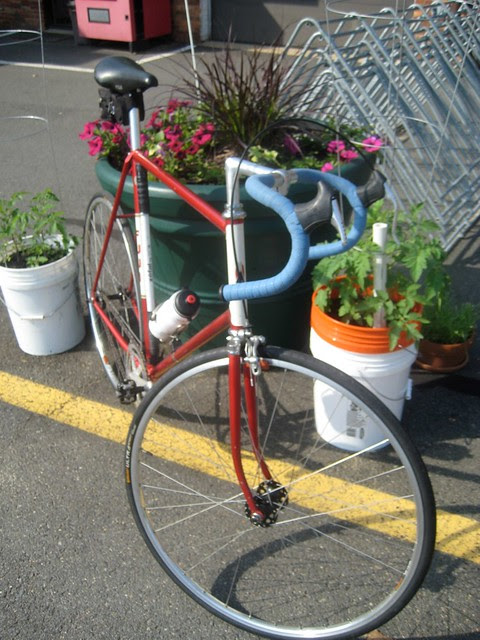 Yeah, I know, too much alliteration! But this morning I took the first ride on a fixed gear bike in a long time. I woke up before my alarm (I've moved recently and my new place gets a lot of light in the morning!) and decided I'd go for a short ride before work. Debating which bike to ride (yeah, when you own a lot, you have to think about it), I decided the Fuji track bike was the choice of the day... both for the simplicity of one gear and because I figured it'd be a bit more of a workout on a short ride.

It was a beautiful morning, not too hot yet, and everything is green and growing and filling the air with amazing scents. Not a lot is blooming along the trail at this point... some honeysuckle and one or two other white blossoms I couldn't readily identify. Not a lot of wildlife either... just a chipmunk and this box turtle, who was slowly making his way across the path. I decided I'd intervene on his behalf and move him off to the grass at the side, lest someone came zipping along and ran into him. 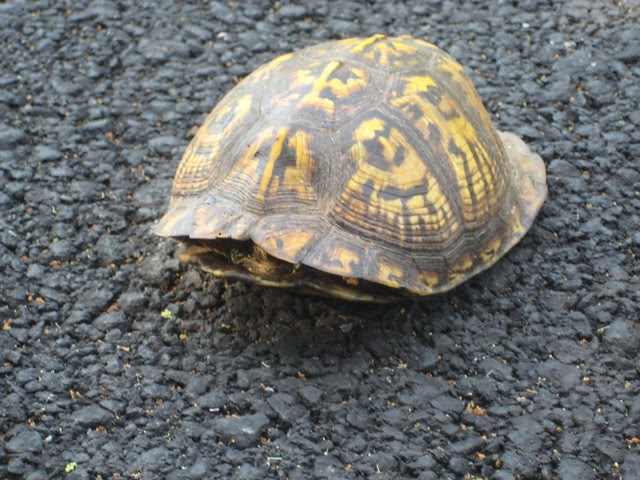 The only real negative of the whole ride was about a block from home, when I rode over a spot where they had just filled a pothole. A small hunk of gravel got picked up by my tire (helped by the sticky tar, I think), and lodged itself between the tire and the fork crown, adding a sudden amount of drag to my forward motion. Not catastrophic, just annoying, and luckily I was close to home.

All in all a lovely ride, and well worth the effort to get out early.

Yesterday was a big day... the Bike/Car/Bus Challenge out in Reston, Virginia, not far from me here in Vienna! An event where folks "raced" to get from A to B by each of three different modes of transportation. Bruce Wright, longtime bikes@vienna employee, chairman of Fairfax Advocates for Better Bicycling and friend of mine was triumphant! Check it out at the links below.


http://reston.patch.com/articles/wright-on-a-bike-wins-commute-challenge
Posted by Tim at 10:21 AM No comments: