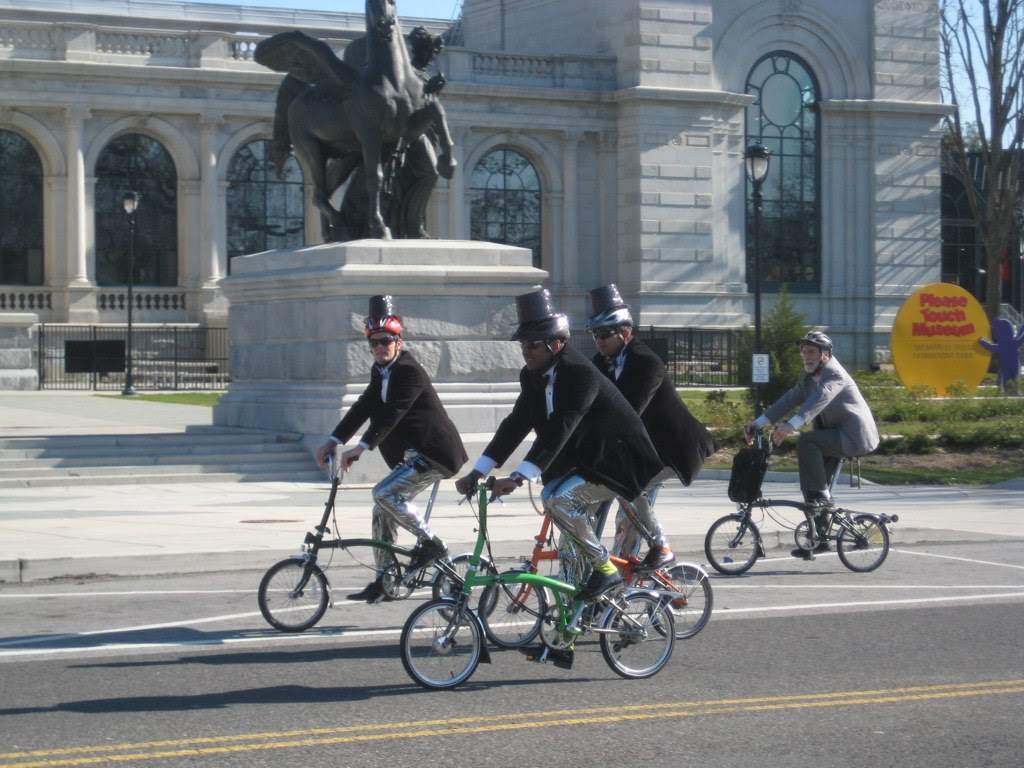 Here's a shot of the trio of gents who won the "Best Dressed Male" prize, a lovely Brooks Barbican messenger bag!

The Philadelphia Daily News has some photos up, and I show up in two of them:

I'm in photos 5 and 8, behind and to the left of the woman dressed as a stewardess, who I suspect is the sole reason I appear in any photos at all. It pays to be near one of the winners of "Best Dressed", apparently!

I've also posted some of my own photos on Flickr:

Tom and Newton after the race! 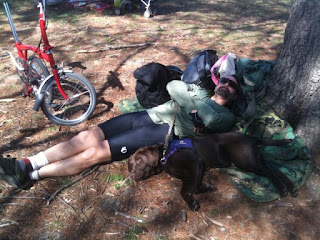 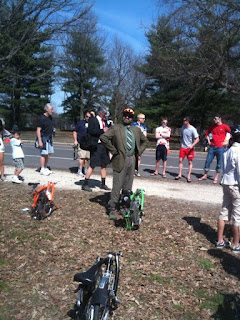 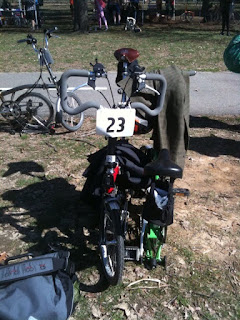 Waiting for start.
Posted by Tim at 11:21 AM No comments: 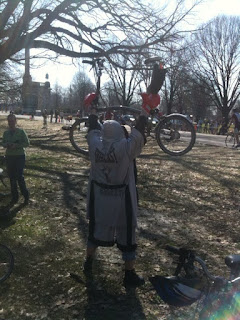 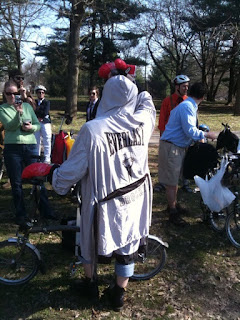 Steve was all decked out in a boxer's robe and trunks, with gloves, for that "Rocky" look. I thought with the race being in Philly and all, he'd be a sure bet for Best Dressed Male. No such luck... it went to a trio of guys in velvet coats, plastic top hats and shiny silver pants.

Steve, by the way, designed the t shirt for today's race, as well as the 2010 Brompton World Championship shirt. He works at Bfold in NYC part of the year. 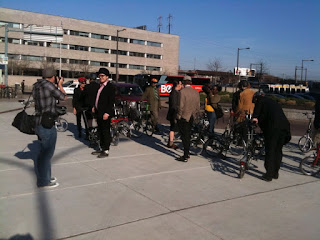 Seems silly to post this twice, on two different blogs, so check out the latest post I put on our shop blog, about an interesting visit by a customer with dogs:

http://bikesatvienna.blogspot.com/2010/03/our-customers-often-make-us-smile.html
Posted by Tim at 12:36 PM No comments:

A change in the comments policy on this blog

After discovering FIFTEEN new "comments" this morning, all of which appear to link to some sort of Asian adult entertainment site, I have changed the comment settings for this blog. In future, all comments will have to be approved by me before they appear on the blog. I don't like having to add this extra step, but it's apparently necessary. I will endeavor to act quickly to approve appropriate comments.

Thank you to all my readers for your understanding and patience. 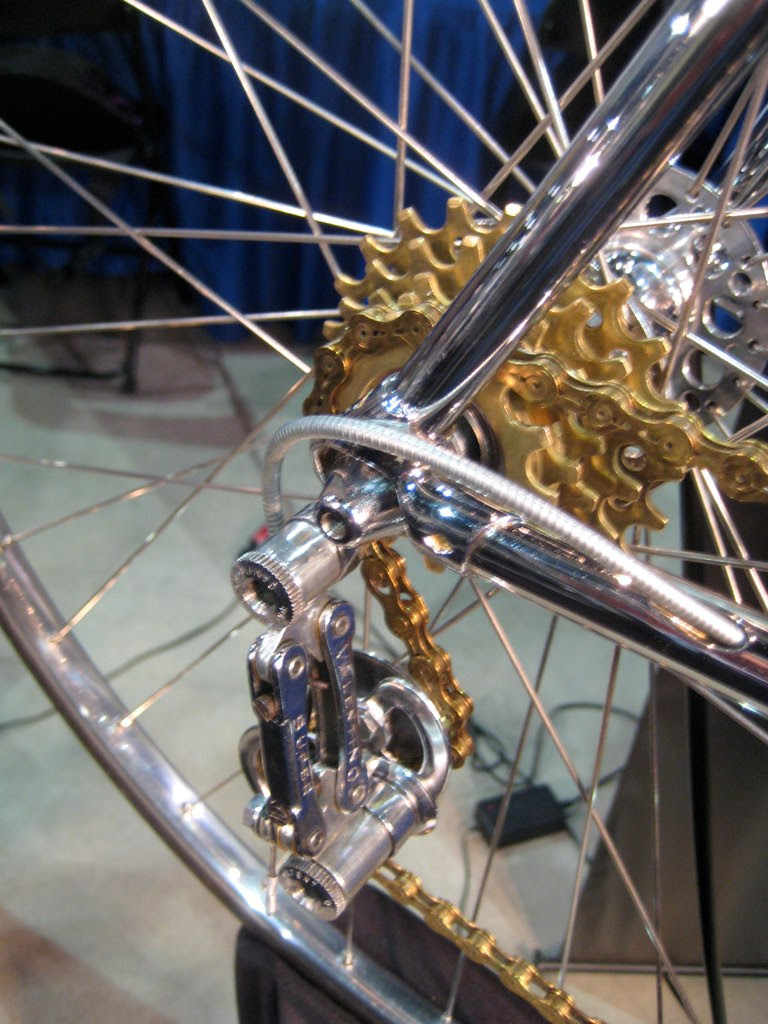 This year the NAHBS was held in Richmond, VA, so it was easy for me to get to. Ironically, I actually spent more time at the show when it was in Portland, OR, in 2008. I guess it's just easier to make a real outing of it when it's so far away... one's more inclined to take time a chunk of time off for a distant event, perhaps. And of course, 2008 was my first time, so I immersed myself a bit more.


That's not to say 2010 wasn't good... just that my time was measured in hours rather than days. I still enjoyed the show and saw some amazing, wonderful bikes. And I got to visit the folks from Brompton, who sent Katharine from their UK offices, as well as their US agent, Ed Rae. I spent a fair chunk of time at their booth today, and it seemed they got a good amount of attention and interest. I think people were suprised to see a folding bike there, even more so one made in England. But the Brompton is essentially a handmade bike, so it fits in better than one might think.

After visiting with those folks, I then went on a lap around the show, checking out the various builders' work and also checking out some of the tools and materials of the trade. As in 2008, I found the show inspiring, and I hope it helps get some more momentum behind my efforts to get my own framebuilding moving forward. It always helps to see other peoples' work, to see the kinds of things that folks get excited about as well.

For me, bikes built from a more "transportation" perspective appeal to me. To my mind that encompasses commuting and errand bikes, as well as touring and randonneuring cycles. And luckily for me, that range of bikes was well represented at the show. It's lovely to see the various special touches builders are incorporating into bikes designed to get you and some stuff somewhere. Custom racks, classy bags and bag hardware, fenders, lighting systems, all integrated into the design of the bike... it makes for an elegant, practical, and artful bicycle. One of the nicest bikes I saw was this "mixte" from Yipsan, complete with custom rack with some lovely woodwork incorporated into it. The customer apparently has a thing for sunflowers, and that was an inspiration for the overall design for the bike. It's not merely a beautiful bike, however... aside from the rack and lighting system, the bike also has an internally geared Shimano Alfine hub and disc brakes, which makes for a solid, reliable and worry free bike. 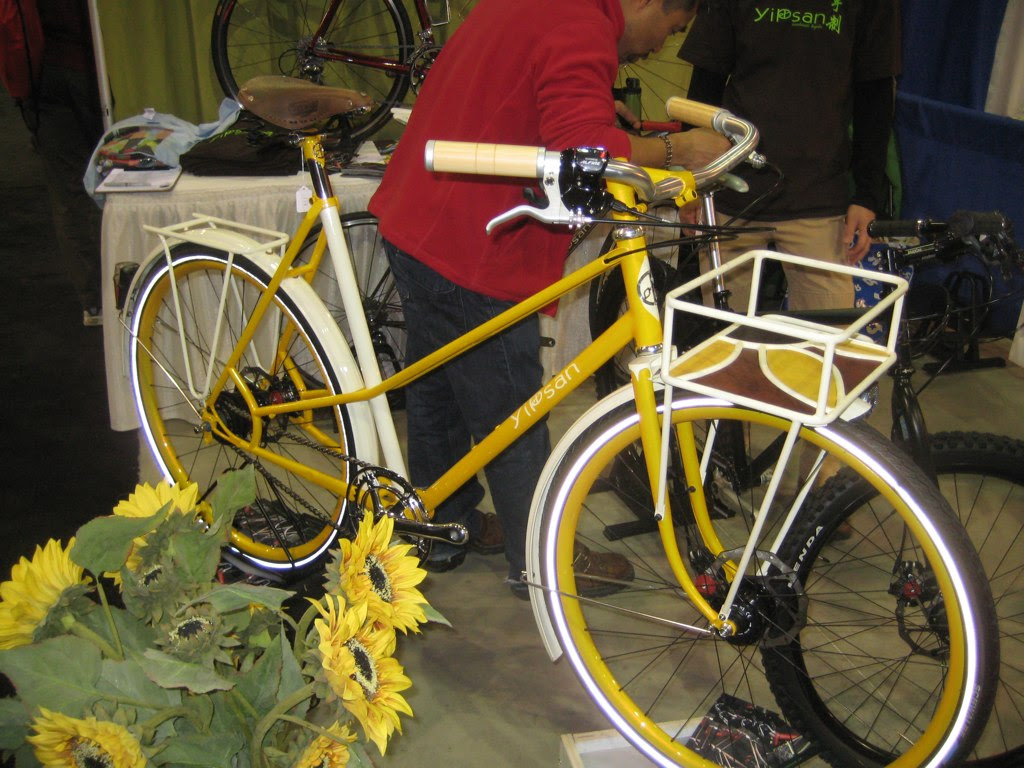 Sacha White, aka "Vanilla Bicycles" of Portlan, OR, was also there, and par for the course, showed some impeccable work. Below is one of his interpretations of a "practical" bike. Gorgeous machine, and eminently useful. 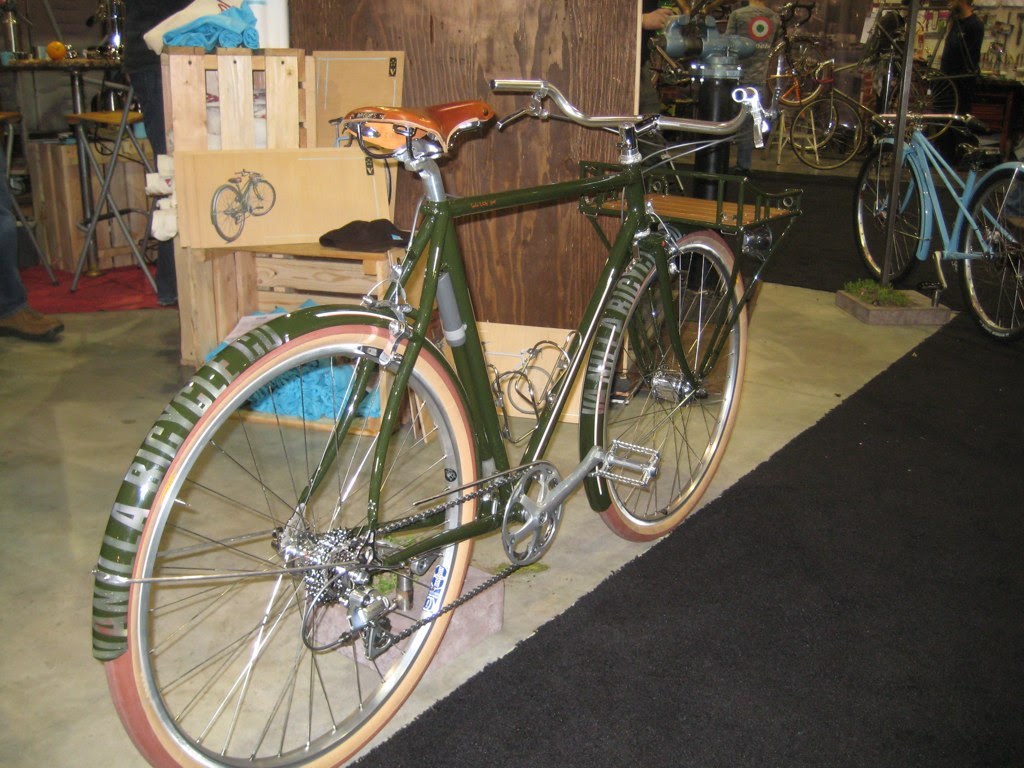 In a different vein, Richard Sachs was there, showing his impeccable work, slanted mostly toward the racing set: 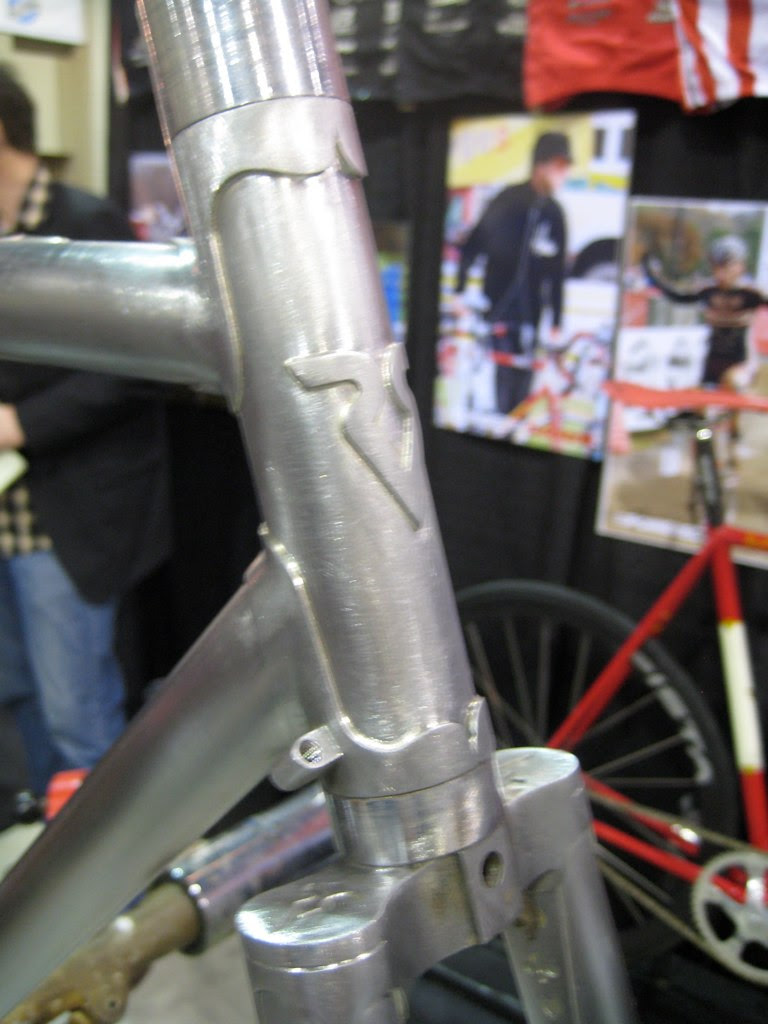 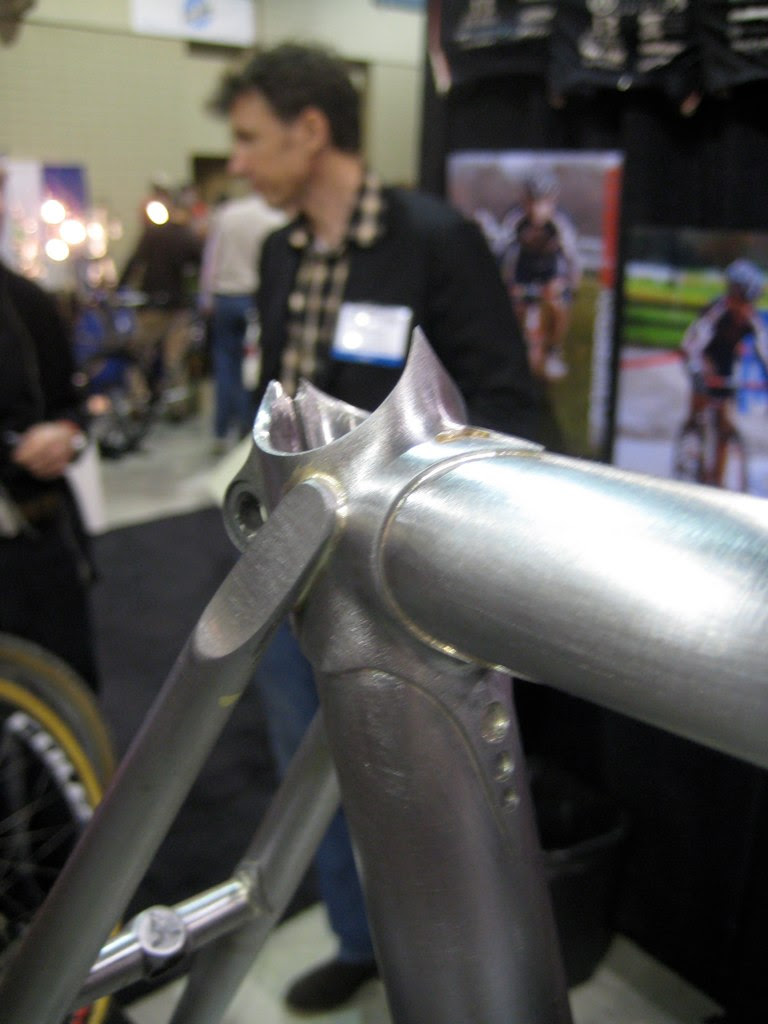 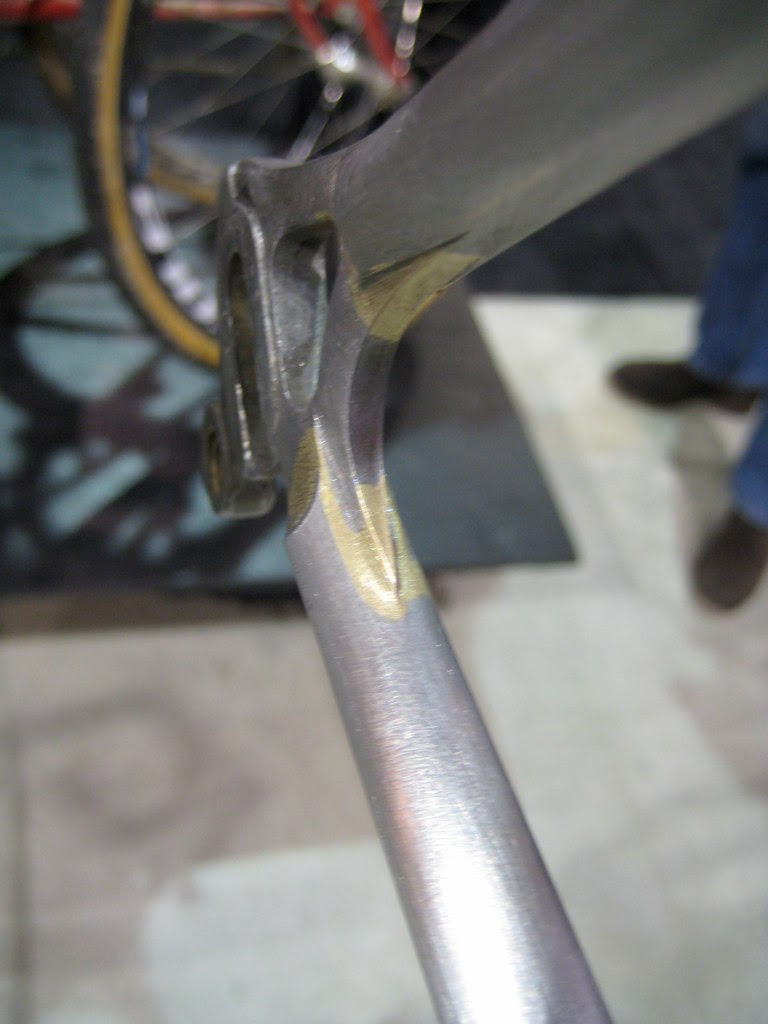 Then, in the realm of the whimsical and weird, there was this bike from Ground Up that incorporated a rearward facing "flamethrower"... a system incorporating some sort of fuel compressed in a tank, with a nozzle facing aft over a small burner cup, similar to a tiki torch, which ignites the vaporized fuel! Photos of the system in action are quite amazing! 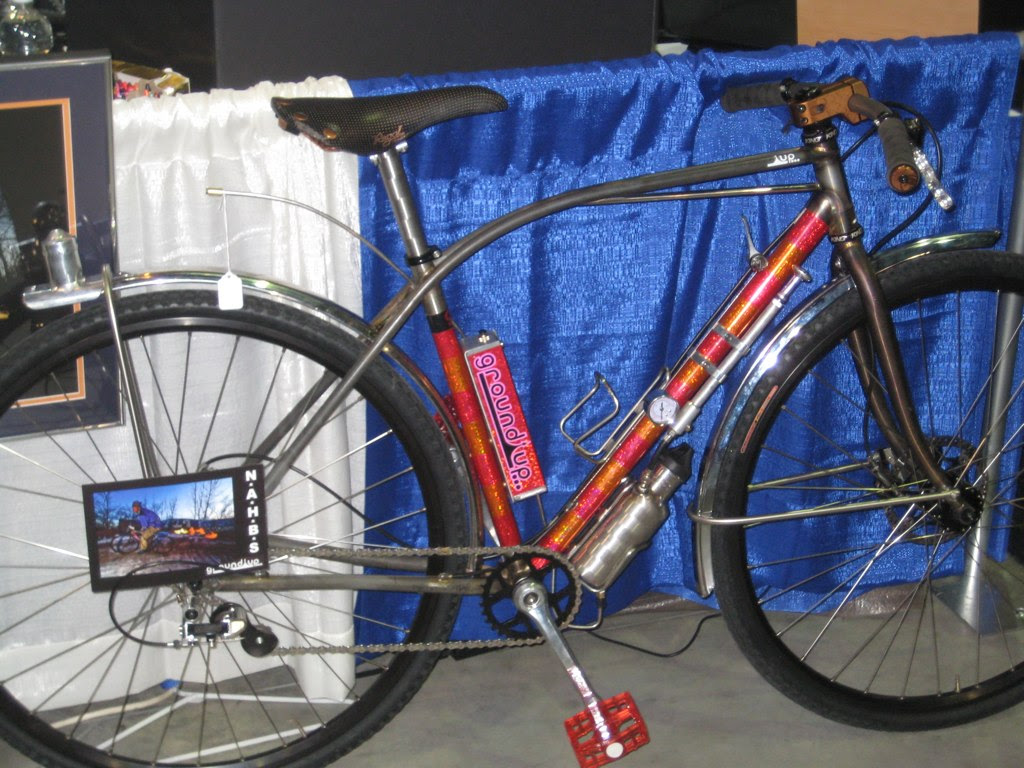 And finally, I'd be remiss if I didn't include at least one photo of this amazingly shiny, sparkly bit of bicycle "eye candy" from Cherubim... an amazingly finished and polished machine utilizing some older classic parts, highly plated and polished. Gorgeous! 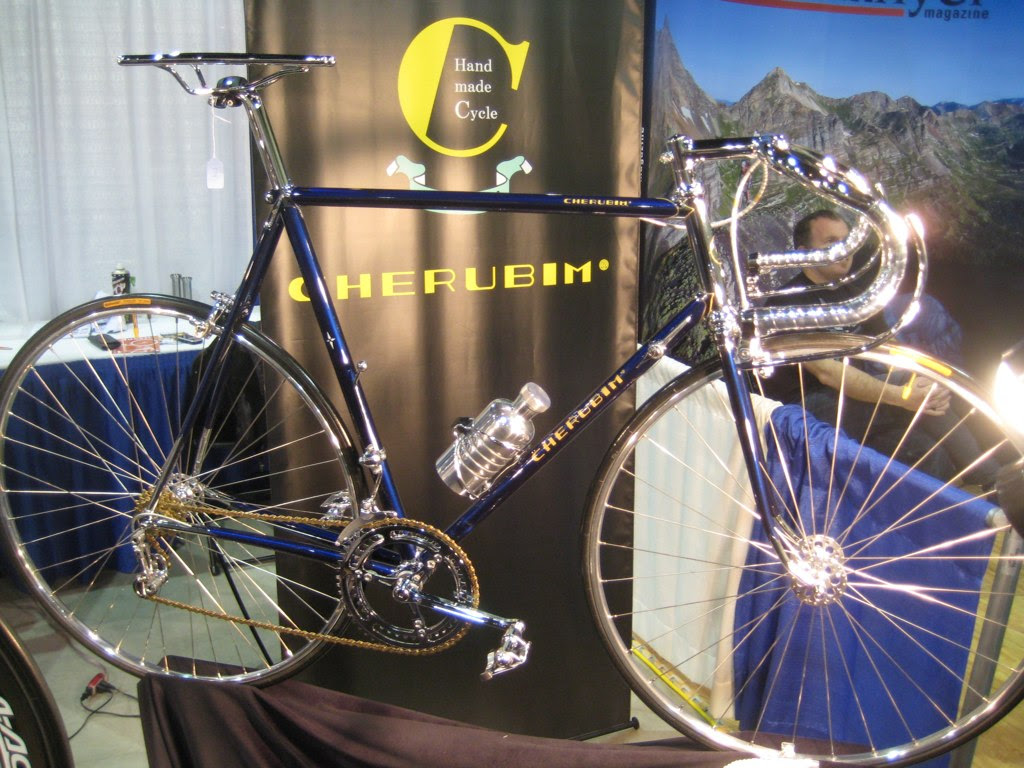 Also, Google NAHBS 2010 to find other folks' pictures... I'm sure there are lots that are better than mine. I'm still getting the hang of shooting these bike shows.
Posted by Tim at 12:22 AM 3 comments: