... I finally own a bike built by Proteus Design, of College Park, Maryland!

So what's so special about that? 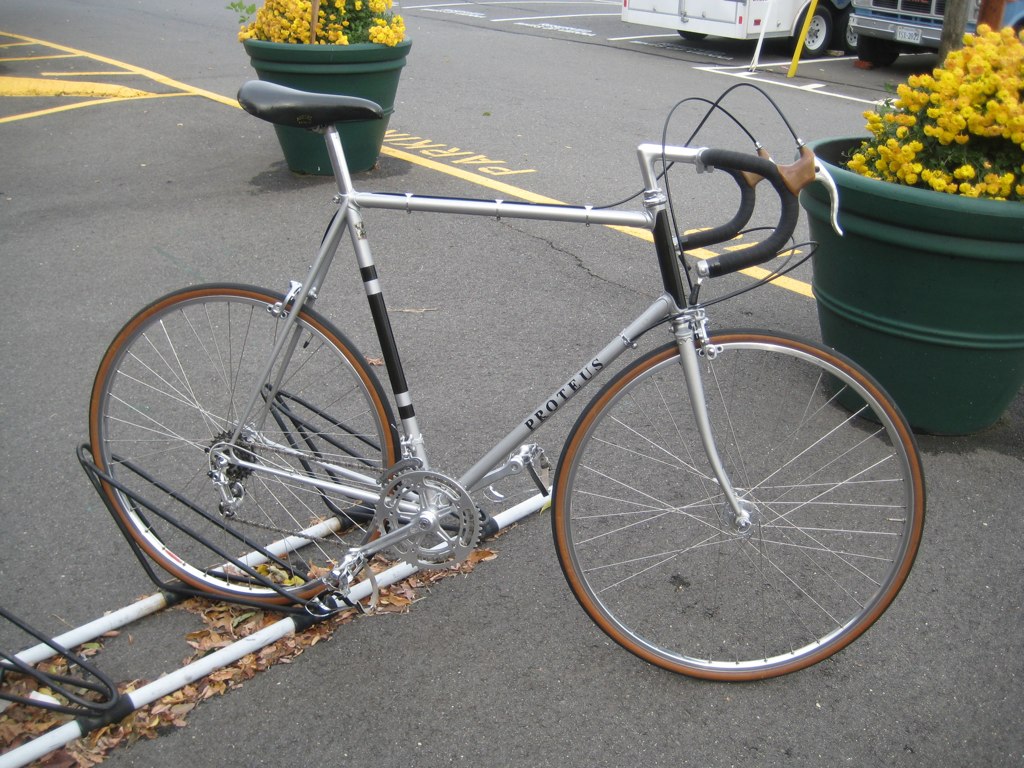 Well, for one thing, Proteus, while still open for business as a bike shop, stopped being a framebuilding concern a number of years ago. As near as I can tell, their heyday was the late 70s to mid 80s, framebuilding-wise. I grew up not far from College Park, and in high school and college, I'd often visit and gaze longingly at the lovely hand built frames and fully assembled bikes. These were the first truly hand built frames I ever saw, and they were amazing to me. I hoped one day to be able to own one, but the prices seemed completely out of my reach back then. And honestly, they were. 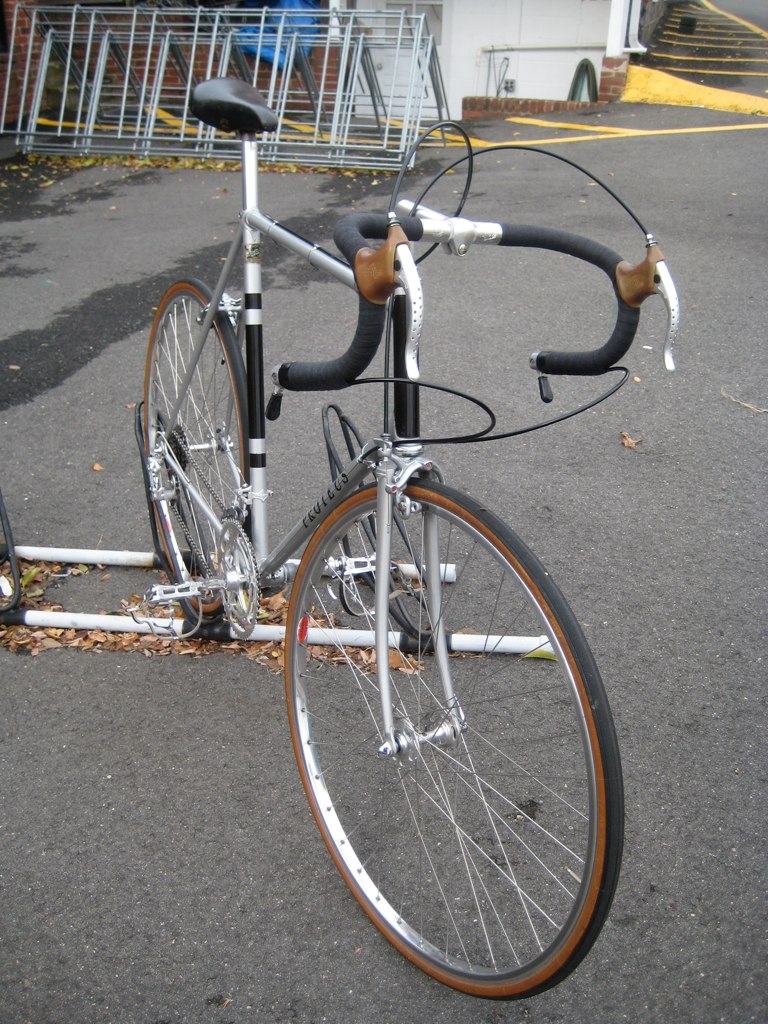 So in 1980, I did buy a bike built around a hand built frame, but it was a production model from a new, relatively unknown company in Wisconsin called "Trek". It was and is a wonderful bike, but I still always held out hope of one day owning a Proteus. Who knew it would take so long?

So how did it come about? Well, a friend and customer, Marty, emails me a lot of links to bikes on Craig's List. A while back he sent me a link to a Proteus bike for sale in Baltimore. At the time I thought I should let it go, as I really wasn't in a position to buy another bike, and the price was more than I could afford. Imagine my surprise when Marty sent me a link a few weeks ago, with a new ad with a lower price for the same bike! This time I couldn't resist going to take a look. So off to Baltimore I went after work one evening. I was a little put out at first when I arrived and nobody answered the door, but after repeated knocking, just as I was about to give up, the owner appeared.

The bike was even better than I expected. It looks like it's had very little real use in the 30+ years since it was sold to the original owner. I'm now the fourth person to own this bike, and I'm a very happy fella to have it. It's beautifully made, and a very nice riding bike. The parts are almost all Campagnolo Nuovo Record, which were seen as the creme de la creme back in the day. The brakes are not Campy, but are from the French CLB company, which were known for their light weight. They seem very well made, and very pretty. All in all, a wonderful bike. About the only downside is that it was built with 27" wheels in mind, and can't easily take the now-standard 700c size more common today. I can live with that though, as the wheels are in great shape and there are still good 27" tires and rims made.

So there you have it... a dream deferred, but achieved! 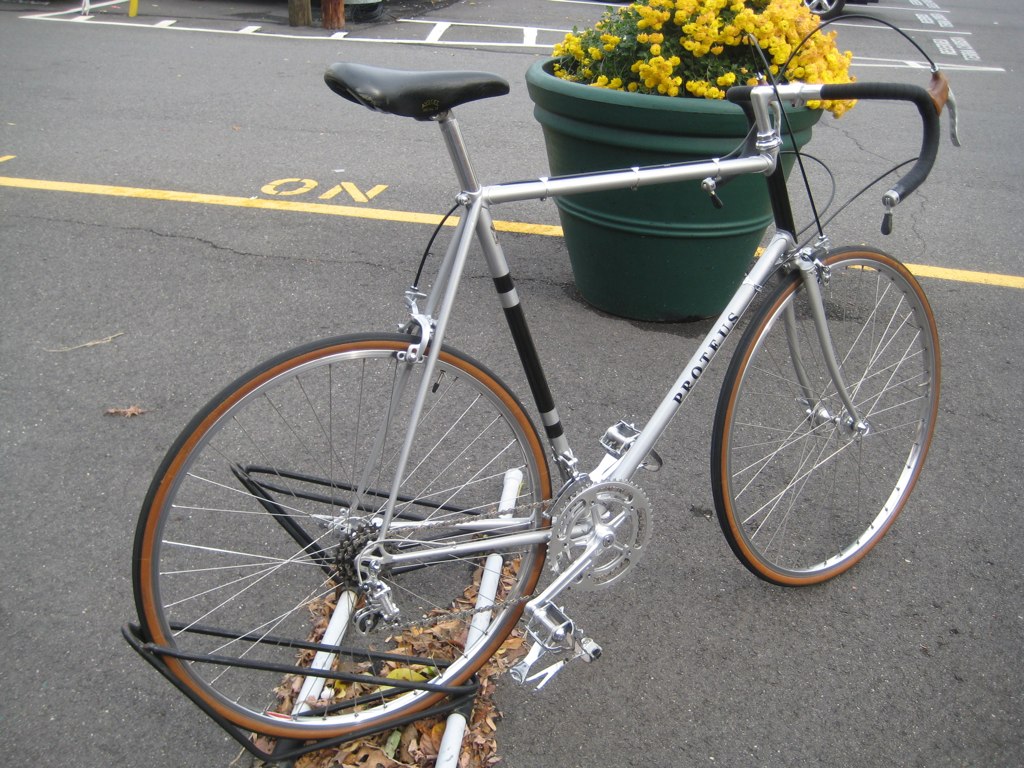 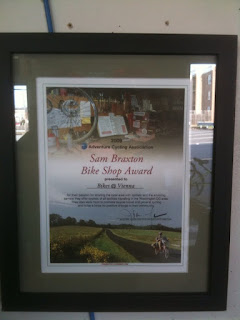 Just as I'm trying to get my gumption back, to get my creative energy flowing better, and get back in gear with writing here, I received some very sad news. I'll probably post more details later, but the short version is that I just discovered that a woman I dated and loved back in college passed away in 1993, at the far too young age of 32. I'm in a bit of a state of shock right now... we'd fallen out of touch long ago, but the news still saddens me. Please bear with me and keep checking back. I will get back in the swing of things.
Posted by Tim at 9:16 AM No comments:

Below are links to all the photo albums I currently have posted from my trip to England in October. Enjoy!

I hope to post a few photos from my visits to the Brompton (folding bikes) and ICE (recumbent trikes and bikes) factories when I get the chance.
Posted by Tim at 12:18 AM No comments:

My apologies to loyal readers... I've been in a pretty big slump lately, as you can tell by the lack of recent posts here. Sometimes the creative juices just don't flow, but I'm trying to get my gumption back. I came out of a similar slump about a year ago, so if I did it before I figure I can do it again!

I've been helping out my mother lately, who just had a knee replacement, and Wednesday she asked me to drop off some food for donation at a church near her. There were two fun bonuses to this trip, aside from simply helping her out. First, I spotted this car in the parking lot: 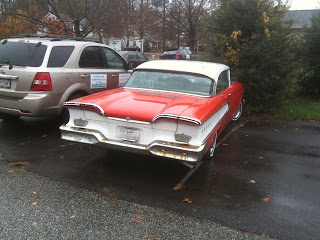 Now, I'm not really a car nut, but I have to admit, I've seen few enough of these that it was kinda fun to spot this one. What is it? Well, the more astute among you will recognize it, but here's another hint: 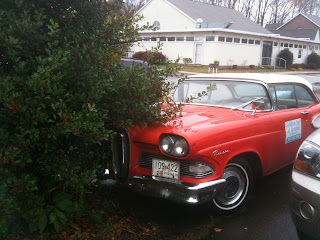 Give up? Well, here's the final clue, a close-up of the famous (or infamous) "Zero" grille, complete with the model name: 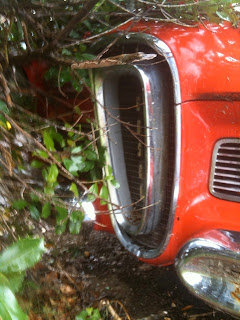 Yep, it's a Ford Edsel! One of the great automotive failures of all time! I'm no authority, but as I understand it, the car was introduced with much fanfare, and was supposed to be a world-beater, with many advanced features, but it was a huge flop in the marketplace. I've heard a number of reasons, most of which elude me right now, but the two that immediately spring to mind are the name (Edsel was Henry Ford's son's name, and not very catchy as a car model name) and the odd looking grille, which met with a lot of negative reactions. Add to that some quality control issues and you have a car whose name is synonymous with failure.

The other fun part of visiting this church was that I directed a production of The Fantasticks for another charitable cause, way back in 1983, while I was between semesters in college. Aside from a high school one-act, this was my one and only attempt at directing a play, and a musical at that! I make no claim to great art, but all in all I think we managed to put on a decent production at the community theatre level, and the audiences seemed to enjoy it. Most of all I have some good memories from that summer, in part because the show became an opportunity for my brother and I to get to know each other as adults. He and I are nine years apart, and growing up didn't really spend a lot of time together. But he'd just moved back from the West Coast, and I needed a bass player for the small orchestra for the show... and he plays bass, among other things! We had a lot of fun working together, and it went along way toward bringing us closer. And we raised money for a good cause to boot!

Ironically, nowadays the Edsel is highly collectible. It was rather odd to see this one sitting in a church parking lot, slowly rotting away to all appearances. It has a sign on the side for what might be a retirement home or nursing home, which seems kind of peculiar.
Posted by Tim at 11:08 PM 2 comments: